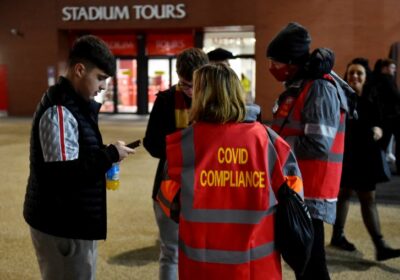 LONDON (REUTERS, AFP) – World sport was again hit by Covid-19 infections on Thursday (Dec 16) with football and rugby matches called off, a cricket series cancelled and holiday action in North America under threat.

A wave of new infections, driven by the new Omicron variant of coronavirus, suggested more postponements and cancellations will follow as sporting codes warily await the impact.

The Premier League fixture list was thrown into chaos as six games were postponed due to Covid outbreaks, taking the total for the past week to nine but league officials intend to continue with the schedule where safely possible as new Covid-19 cases in Britain hit a record for the second day running on Thursday.

Amid a multitude of postponements in England’s lower leagues, the Football League (EFL) on Thursday ordered clubs to implement enhanced safety protocols for training, with social distancing and restrictions on the use of indoor facilities, manual therapy and group travel.

Rugby’s European Champions Cup has also been hit with Montpellier’s game at home to Leinster the latest to be postponed over Covid cases in both squads, while Welsh club Ospreys suggested their trip to Racing 92 in Paris could also be off with at least seven positive cases in their camp.

Over the last three days, the National Football League, National Hockey League and National Basketball Association have faced a surge in positive tests, with more expected on Thursday, forcing players into league mandated Covid-19 protocols and the postponement of games.

The holiday season across the United States and Canada is usually filled with sporting action but, with the coronavirus spreading through locker rooms, fans may not see all their favourite players.

The West Indies’ cricket tour of Pakistan was cut short after the number of positive Covid-19 cases in the touring party rose to nine though Thursday’s T20 match did proceed, with the hosts claiming a seven-wicket win to complete a 3-0 series sweep in Karachi.

But the three-match One Day International series, which was due to start Saturday and is part of the qualifying round for the 2023 World Cup, is now off. The matches will be rescheduled for June next year.

The cancellation of the ODI series is a huge blow to Pakistan, which has seen tours by New Zealand and England called off in recent months on security grounds.

However, India’s tour of South Africa, although curtailed with four planned T20 internationals dropped from the original schedule, will proceed.

The Indians flew on a chartered aircraft and will be confined to their hotel and the cricket grounds in a country which has had a rapid rise rate of Covid infections following the identification of the Omicron variant.

The tour is of crucial importance to the cash-strapped host body, which announced a R221 million (S$19 million) loss at its annual meeting in October. The India tour is expected to earn South African cricket about R600 million in broadcast fees and other income although it is not yet clear whether spectators will be able to attend matches.

Ferrari driver Charles Leclerc said he was self-isolating at home in Monaco after testing positive. The news came after Sunday’s conclusion of the Formula One season. The 24-year-old also tested positive in January, before the season started.

Haas driver Nikita Mazepin is the other current driver hit with Covid and had missed the season-ending Abu Dhabi Grand Prix.