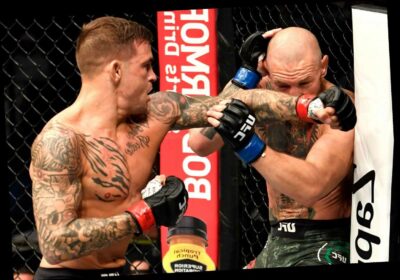 Conor McGregor’s next step muddled by another UFC star

“The Diamond” sparkled at UFC Fight Island against the biggest name in combat sports.

Dustin Poirier weathered the early storm from Conor McGregor’s punches to secure a TKO at 2:32 of the second round in the UFC 257 pay-per-view headliner, avenging a 2014 loss to the Irishman on Sunday at Etihad Arena in Abu Dhabi, United Arab Emirates.

“I’m happy, man, but I’m not surprised,” Poirier said in the octagon following the victory. “I put in the work.”

The win for Poirier (27-6, 20 finishes) comes at a time of uncertainty for the UFC lightweight division. Unbeaten champion Khabib Nurmagomedov ostensibly retired after his latest title defense in October. His victory over McGregor (22-5, 20 finishes) positions him for a potential title fight against either Nurmagomedov or, more likely, a different opponent to crown a new champion.

“I felt like this was a title fight,” Poirier said, declaring himself the champion.

To start the bout, Poirier felt the stinging power of McGregor’s sniper rifle of a left hand early. After the pair exchanged heavy clinch strikes against the fence, the southpaw McGregor stung Poirier with his jab and likely won the round.

In the second, McGregor came out strong again, but his lead right leg was reddened by the kicks of Poirier.

“That low calf kick was very good,” McGregor said in the cage after the fight. “My leg was dead.”

Midway through the second round, Poirier caught up to McGregor with a flurry of punches at the cage, finally putting down the former two-division champion with a heavy right hook to the face that forced the referee to call a halt to the bout.