College Football Looks to Fundamentals to Combat a 2020 Hangover 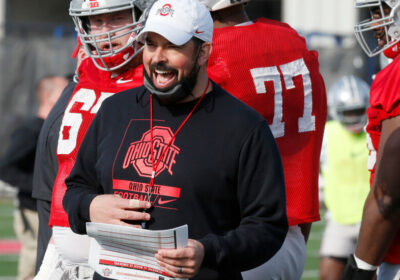 COLUMBUS, Ohio — The football coaches talked for days about the basics: how to carry the ball, how to handle a block, how to tackle. As they dissected their position groups, the men professed what they had come to most deeply believe about their game.

So went the off-season at Ohio State — yes, the Ohio State that reached last season’s title game, the one with the football complex lobby with 67 trophies and a hallway, speckled with even more prizes and shrines, that feels as long as a field. But because the Buckeyes had played just eight games last season, the coaches had come to fear that their mighty program, perpetually stocked with elite athletes, was vulnerable to infiltration by rust and inexperience.

“The truth is, the more talent you have, the harder it is to acquire discipline and skill,” Ryan Day, Ohio State’s coach, said in his windowless office on Friday. “The perception that, ‘Well, you recruit some of the top kids in the country and they just come in and they’re ready to roll,’ it’s actually the inverse. They have a lot of work to do with their discipline and skill.”

Coaches, of course, are often persnickety perfectionists who preach the sport’s fundamentals to some extent every year. And perhaps Day, whose fourth-ranked Buckeyes will play Thursday night at Minnesota and host No. 11 Oregon next weekend, is simply trying to manage expectations around Columbus. Interviews with players and coaches at Ohio State and elsewhere, though, suggest that 2020 is still inflicting a gridiron hangover, or at least worries about one, in many corners of college football.

Teams across the country are expected to prove sharper than they were in the opening weeks of the 2020 season, when sloppy, inconsistent play followed the cancellation of spring practices and scrimmages and redesigns of preseason camps. But more than one-third of Power 5 teams ultimately played eight games or less last season, and a year later the sport will see the consequences of fewer games, particularly the out-of-conference matchups that give young players snaps under the pressure and atmospherics of major college football.

“It’s going to take a full season to get over all of this,” Danny Gonzales, New Mexico’s coach, predicted.

Aside from the debate over whether to play at all last season, few issues divided college football in 2020 quite like how to regard teams that, because of viral outbreaks, leaguewide strategies or both, competed in fewer games than others. Ohio State was at the center of one of the most contentious disputes when the Big Ten Conference backed away from its requirement that a team play at least six regular-season games to be eligible for the league championship. At 5-0, the Buckeyes were allowed into the conference title game and proceeded to beat Northwestern; they crushed Clemson in a College Football Playoff semifinal and then were routed by Alabama for the national championship.

After all of that, though, the Buckeyes had still played just eight games. Every team in the Atlantic Coast, Big 12 and Southeastern conferences had competed in at least nine.

Some coaches contend that the physical toll of playing more games outweighs any gains in experience. And some coaches whose teams played far fewer games than normal last season said that they had not adopted an especially different approach for 2021.

Jedd Fisch, Arizona’s first-year coach, said he believed fundamentals were “always lacking early on in camp” and that he had designed spring practices to highlight them.

“I’m not sure about the difference if these guys played five games last year or if they played a 12-game season,” said Fisch, who was most recently the quarterbacks coach for the New England Patriots. “I think if you interviewed 32 N.F.L. head coaches, they would all tell you that the first thing they need to focus in on is fundamentals, and that’s after having four years of us.”

To prepare for this season, some Power 5 programs have focused on the basics with what people on and around the teams depicted as unusual ferocity.

Clay Helton, the coach at Southern California, which reached last year’s Pac-12 championship game, said he thought quarterbacks were especially susceptible to stunted development given how scarce snaps were in 2020. His solution this year was to dispense with “the nice seven-on-seven world where no rush is coming at you.” In its place for signal callers like Kedon Slovis, he said, were repetitions intended to more closely resemble the urgency and chaos of a pass rush during a game.

“I wanted to give him and the rest of our young quarterbacks the opportunity to flourish in live situations and put them under fire,” said Helton, who was a quarterback at Auburn and Houston.

The Trojans, Helton said, also structured their preparations to take advantage of as many tackling opportunities as they could under N.C.A.A. rules.

At Ohio State, Day said he realized in the weeks after the loss in the national title game that younger players had missed perhaps hundreds of reps during the truncated season. A fix, Day concluded, would require a start from “square one and not making any type of assumptions on little things.”

He had heard his assistant coaches talk about their fundamental philosophies in job interviews and past meetings. This time, he decided, he wanted them to detail and defend their views in front of the staff, with their opinions potentially challenged and disassembled. The sessions went long. Asked on Friday to summarize his approach, Kevin Wilson, the offensive coordinator, responded with a monologue of nearly 700 words.

But Wilson said the exercise ahead of spring practice had forced him to think through his drills and to consider the “ruts” he might have fallen into as a coach. He also pressed his players to grade themselves and to identify fundamentals they wanted to improve on for 2021. The result was the routine emphasis on the game’s building blocks that Day sought.

“I think coming off of last year, we felt we worked the scheme hard and we’ve continued to work scheme,” Wilson, a former head coach at Indiana, said. “But we thought we missed so much fundamentals and we were going to be young enough that to have an impact on the season, we had to emphasize it more than ever.”

Coaches pitched the approach to players, who eagerly agreed.

Despite their accomplishments, Ohio State players had regarded the back-to-basics emphasis as a pathway for improvement throughout the season, linebacker Steele Chambers said.

“Everyone you play, especially with our schedule, is going to have great athletes, great talent on the other side,” said Chambers, who was previously a running back for the Buckeyes. “It’s the little things like the fundamentals that can really give us an edge.”

Day said he expected to evaluate the approach in mid-October, when Ohio State will have a week off, to consider how to coach fundamentals down the stretch of the season.

He knows his team could look different: By then, the Buckeyes are scheduled to have played more games than they did in the entire 2020 regular season.