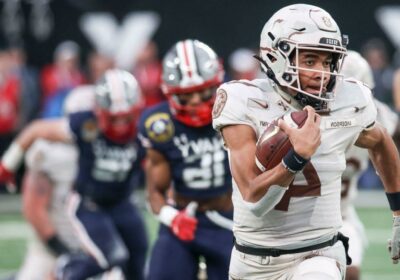 12 p.m. on ESPN at Thomas A. Robinson Stadium in Nassau, Bahamas

Connelly: Toledo was really close to having a huge year in 2021. The Rockets went a decent 7-5 but were 0-4 in one-score games. They won five MAC games by an average of 21.6 points but lost three by an average of 2.7. Freshman quarterback Dequan Finn ended the regular season wonderfully, going a combined 44-for-64 for 677 yards, eight touchdowns and no picks in the Rockets’ last three games, and the defense was excellent for most of the year, finishing 20th in defensive SP+.

MTSU reaching 6-6 was a bit of an accomplishment considering the QB issues the Blue Raiders had to work through — their No. 1 quarterback (Bailey Hockman) retired in September, and their No. 2 (Chase Cunningham) was lost to injury in October. They managed to win two of their last three despite iffy production from their signal-callers, but those came against teams ranked 125th and 93rd in SP+. Toledo is 50th. MTSU has a solid pass defense, but Toledo simply has more upside. SP+ projects a 13.2-point advantage for the Rockets, and that feels more realistic to me than the 10-point spread.