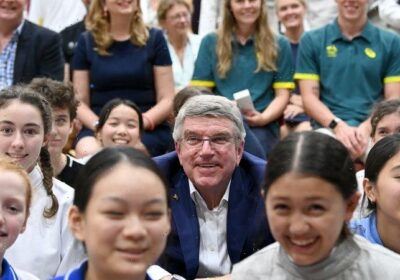 International Olympic Committee (IOC) president Thomas Bach says modern pentathlon will know its fate as an Olympic event by the start of next year as the embattled sport faces a revolt from its headline stars over the axing of its equestrian component.

The Union Internationale de Pentathlon Moderne (UIPM) announced last week that obstacle racing would replace showjumping and feature alongside swimming, shooting, fencing and running after the Paris Olympics. There are also reports of a new condensed format and other innovations to try and make it more appealing to a wider audience.

Much of it stems from an incident at the Tokyo Olympic Games that saw German coach Kim Raisner sent home after she punched a horse that had been shy to attempt jumps. Annika Schleu, the rider, had also been accused of being too vigorous with her whip.

A fierce backlash over animal welfare backed the UIPM into a corner, while modern pentathlon was dropped from the provisional list of sports for the Los Angeles Olympics in 2028, with swift reform its only chance of making the cut.

Bach, who was in Brisbane on Saturday to complete a tour of venues for the 2032 Games, said the IOC would wait for official confirmation from the UIPM about its new format before deciding on the final group of sports for 2028.

The German also said that senior IOC officials would take a close interest in how any decisions about the future of the sport are being made given the anger among many athletes, among them Tokyo Olympic champion Joe Choong, who said he would quit the sport if the changes were enacted. 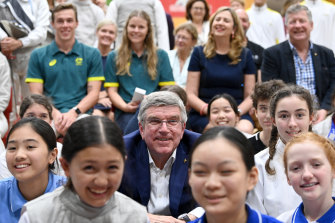 “The situation is that we have not yet decided about the inclusion of modern pentathlon for the Olympics of 2028. We are waiting now for the decisions to be taken in the international federation. We are also monitoring how they are taken,” Bach said.

“After this, the executive board of the IOC will make a decision either later this year or, at the latest, the beginning next year.”

Modern pentathlon officials say the sport has no choice but to update its offering or wither on the vine. They say horse riding can be exclusive and its dispensation would open the event to new audiences and competitors.

But many athletes, including Australia’s 2016 Olympic champion Chloe Esposito, have been stunned by a move they believe changes the very fabric and soul of the sport, which began its Olympic life in 1912 and was modelled on the skills needed by cavalry officers.

“It is heartbreaking. I don’t know if I can really keep being interested in watching and following along – it won’t feel like pentathlon any more,” Esposito told the Herald late last year. “I’ve been riding since I was 10. Young athletes have worked hard on their riding. All that goes to waste.”