NSW halfback Nathan Cleary has been ruled out for up to a month, likely robbing him of his chance to turn out in the State of Origin decider.

While the Penrith playmaker has avoided surgery after being diagnosed with a lateral ankle injury, he appears long odds to be fit for the July 10 Origin clash at ANZ Stadium. 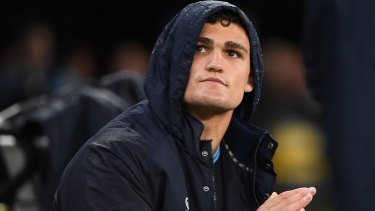 Sidelined: Nathan Cleary watches from the Blues bench after being forced off the field.Credit:NRL Photos

Cleary suffered the injury in the first half of the Blues' resounding game-two win in Perth on Sunday but failed to take the field in the final 40 minutes.

The Panthers said the injury was high grade and he is expected to miss up to four weeks.

Wade Graham appears the likely candidate to partner James Maloney in the NSW halves after the Cronulla back-rower's superb performance filling in for Cleary in the second half NSW's 38-6 win.

Maloney has backed a recall for former teammate Mitchell Pearce, who was tipped to be recalled for game two before he ruled himself out with groin and hip injuries.

Coach Brad Fittler will announce his side after this weekend's round of the NRL.