Home » Sport » City running away with title, Liverpool closes in on Chelsea

City running away with title, Liverpool closes in on Chelsea 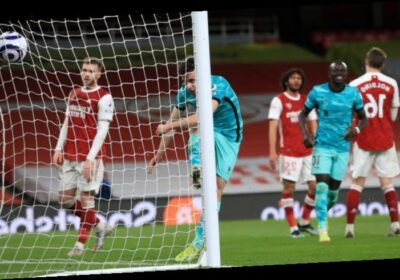 Without all the injuries, perhaps Liverpool would not be surrendering the Premier League title so easily to Manchester City.

Liverpool’s 3-0 victory over Arsenal on Sunday (AEDT) was a reminder of the quality that saw the champions still leading the standings in December before imploding. Now it is City 17 points in front of Manchester United after winning 2-0 at Leicester. 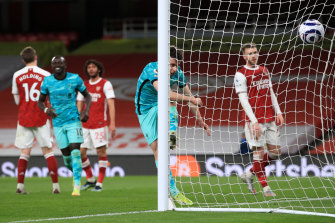 Diogo Jota celebrates by kicking the ball back into the net.Credit:Getty Images

It means the win at the Emirates Stadium, secured by Diogo Jota’s double and Mohamed Salah’s strike, only pushed Liverpool up to fifth place.

Catching Chelsea to qualify for the Champions League became more attainable in the final eight games of the season thanks to Thomas Tuchel’s 14-match unbeaten start as manager coming to a surprising end. Chelsea’s 5-2 loss to relegation-threatened West Bromwich Albion enabled Liverpool to close the gap on fourth to two points.

First place is far out of sight with Liverpool 25 points behind City after winning the title by 18 points last season.

While Arsenal seem set for a mid-table finish, Liverpool can look up again.

And while Trent Alexander-Arnold was overlooked for the recent England World Cup qualifiers, he provided a reminder of his enduring value to Liverpool at least.

It was the right back’s cross that substitute Diogo Jota headed past Arsenal goalkeeper Bernd Leno in the 64th minute at the Emirates Stadium. After Mohamed Salah played the ball through Leno’s legs for the second, Jota struck again in the 82nd minute.

Should Liverpool find a way into fourth, the six-time European champions won’t be relying on winning the Champions League to qualify for next season’s competition. Real Madrid await in the quarter-finals next week.

Chelsea lost to West Brom at Stamford Bridge for the first time since 1978 after it had all started so well with Christian Pulisic ending his four-month goal drought.

The roots of Chelsea’s collapse came when defender Thiago Silva’s return from injury ended after he received two bookings in the first 29 minutes. Then Matheus Pereira scored twice in two minutes in first-half stoppage time to send West Brom into the lead.

Pulisic came back out for the second half but walked off the field before play had started with an apparent leg injury.

Callum Robinson extended West Brom’s advantage by sweeping in a cross from Darnell Furlong in the 63rd minute. Mbaye Diagne sent Sam Allardyce’s visitors, who are next-from-last in the standings, into an improbable 4-1 lead. 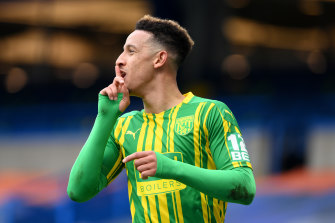 Although Mason Mount tapped in from close range, the deficit wasn’t reduced for long as Robinson clipped the ball over goalkeeper Edouard Mendy to compete the win.

“It was a tough first half for us,” Pulisic said. “We made some simple mistakes we don’t normally make. The red card changes everything. To give them credit, they played their attacks really well. It’s no time to panic. We’ve been in good form and lost one game.”

After not scoring in his opening 39 league games for Manchester City, back-up left-back Benjamin Mendy has now scored twice in his last six as Pep Guardiola’s side closes in on a third title in four seasons. The Frenchman curled in a low shot in the 58th minute.

A defense-splitting throughball from Kevin de Bruyne created City’s second. Gabriel Jesus passed to Raheem Sterling, who returned the ball for the forward to finish rather than shooting himself.

“I am here to provide for the team,” de Bruyne said. “If I can set my teammates up and they finish it then I am happy. It is one more win and it is good to get into the rhythm.”

Leicester missed a chance to dislodge United from second but was helped out by fourth-place Chelsea losing to West Bromwich Albion as the 2016 champions pursue qualification for the Champions League for the first time since then.

West Brom has a slim chance of avoiding relegation, sitting seven points from safety with eight games to go.

But Sheffield United looks doomed, sitting seven points further back in last place. The Blades lost 2-1 to Leeds following Phil Jagielka turning the ball past his own goalkeeper Aaron Ramsdale four minutes into the second half after Ben Osborn had canceled out Jack Harrison’s opener for Leeds.

Leeds moved up to 10th place.