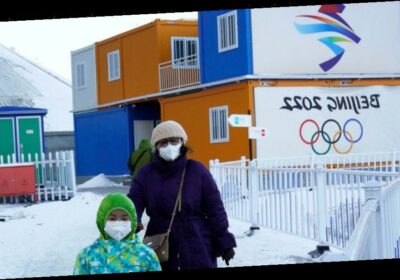 BEIJING — Calls for a boycott of the 2022 Beijing Winter Olympics on human rights grounds are “doomed to failure,” a Chinese government spokesperson said Wednesday, as lawmakers and political advisers began converging on China’s capital for the biggest annual gathering of the political calendar.

The spokesperson, Guo Weimin, also denounced speculation that Beijing was seeking diplomatic gains by providing COVID-19 vaccines and other global assistance to help fight the pandemic, saying China was only seeking to meet its international obligations in providing a public service.

Both bodies open their annual meetings this week amid tight security and social distancing measures to guard against increasingly narrow odds of passing on the coronavirus. Local transmission of COVID-19 has been practically wiped out in China, where the first cases were detected in the central city of Wuhan late in 2019.

Beijing is the only city ever to have been given the right to host both the Summer and Winter Olympics, further burnishing the ruling Communist Party’s credentials for driving economic growth and organizational expertise.

However, a small but vocal core of international lawyers, politicians and activists have brought pressure on Olympic sponsors, sports federations, governments and athletes to shun what they are branding as the “Genocide Games” because of reported human rights abuses against Muslim Uyghurs, Tibetans and other minorities in China.

Those calls have largely been met with silence, although Canada’s House of Commons voted 266-0 in a nonbinding referendum that China is committing genocide against more than 1 million Uyghurs and called for the IOC to move the Olympics from Beijing. The Dutch parliament passed a similar motion, while U.S. Secretary of State Antony Blinken has said he believes genocide is being committed against the Uyghurs.

Guo said the drive against Beijing 2022 would amount to nothing.

“Some individual foreign politicians politicized sports with an attempt to disturb and sabotage the preparations and holding of the Beijing Winter Olympics and called for a boycott,” Guo told reporters at a news conference.

“These acts are in violation of the Olympic spirit. We believe that the moves will not win support from the international community and are doomed to failure,” he said.

The ruling Communist Party has relentlessly cracked down on political opponents and perceived social threats since the 2008 Beijing Summer Games that were supposed to improve human rights in China. Beijing won the 2022 Winter Olympics after several European bidders withdrew over costs and public opposition, leaving Almaty, Kazakhstan, as the only other bidder.

Guo also dismissed speculation that China has deliberately sought to boost its global reputation by providing COVID-19 vaccines and other assistance, in part, say critics, to make up for its mishandling of the initial outbreak that is believed to have spread from Wuhan to the rest of the world.

China has pledged roughly half a billion doses of its vaccines to 69 countries and two international organizations and sold vaccines to another 28, according to Guo. That could mean that a large part of the global population will end up inoculated not with Western vaccines but with China’s traditionally made shots that have been found to be less effective.

Health experts in China say their country is lagging in its coronavirus vaccination rollout because it has the disease largely under control, but plans to inoculate 40% of its population by June.