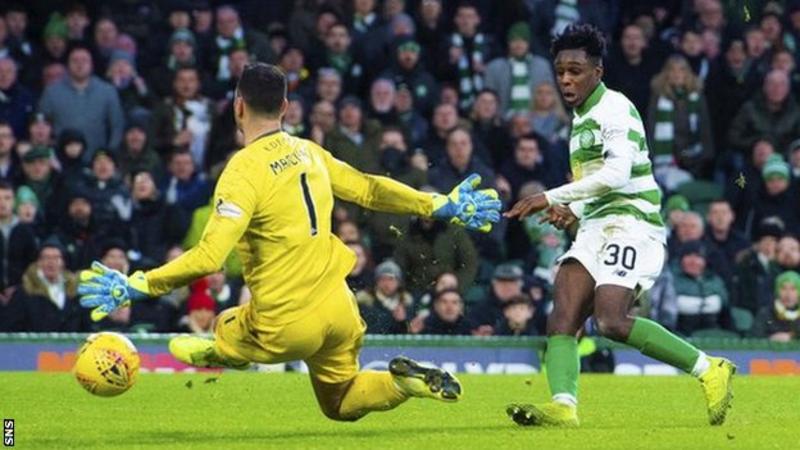 Celtic reinstated their two-point lead at the top of the Scottish Premiership by beating Hibernian to pick up their eighth consecutive league victory.

Rangers momentarily moved in to first place with a 2-0 win at Motherwell, but were usurped after Neil Lennon’s side claimed all three points.

Jeremie Frimpong capitalised on a Ryan Porteous mistake to put his side ahead in the first half.

Odsonne Edouard then confirmed the win with his 15th goal of the season.

The result was Jack Ross’ second defeat from his first six games in charge of Hibs, who remain sixth in the league table.

Lennon had challenged his side to rediscover their attacking verve, which had rather deserted them in recent matches, although results and trophies have continued to go their way.

Hibernian, though, had not come to Celtic Park to roll over meekly and showed signs of attacking intent of their own before the home side began to exert a level of dominance.

They had to show a degree of patience to find chinks in the purple wall of Hibernian’s rearguard and the first time they did that with a sense of purpose, Olivier Ntcham stung the gloves of Ofir Marciano from no more than 10 yards out.

Hibs have not won at Celtic Park for almost a decade but served warning of their own intentions as Martin Boyle cut in from the left and had Fraser Forster diving to his left with a curling shot that the goalkeeper may have got the faintest touch to.

But that was a rare sight of the Celtic goal. The champions had switched to a back three for this encounter and seemed to have an extra man as they swarmed forward in waves.

Frimpong, given even greater licence to bomb forward as a wing-back, was heavily involved, setting up Edouard to fire inches wide and then combining with the same player to break the deadlock after Callum McGregor had forced Marciano into action on a couple of occasions from distance.

The goal owed much to over-elaboration from Porteous just outside his own box. The young defender is experienced enough to know not to do that with Edouard around, but he lost possession to the Frenchman, who rolled in Frimpong to calmly slide under the helpless Marciano.

The second goal was also partially self-inflicted as far as Hibs were concerned – Scott Allan giving the ball away midway inside his own half to invite pressure on his defence. Boli Bolingoli’s initial cross was just too high for Edouard but James Forrest returned the ball into his path and he gratefully swept it past the substitute goalkeeper Chris Maxwell.

Celtic might have scored a third, albeit at the wrong end. Daryl Horgan whipped in a dangerous cross from the left and Christopher Jullien forced his fellow League Cup hero Forster into a marvellous reaction save.

With that, any hopes Hibs had of preventing Celtic from recording their ninth successive home league win vanished.

Man of the match – Jeremie Frimpong

The young man just gets better and better. He is so exciting to watch on that right flank – a constant nuisance to opposition defenders.

He took his goal in a very composed fashion and was a creative force throughout. His deadline day signing is looking more and more like the best piece of business of the summer by the club.

Attempt missed. Leigh Griffiths (Celtic) left footed shot from the centre of the box is close, but misses to the right.

Stephen Mallan (Hibernian) is shown the yellow card for a bad foul.

Kristoffer Ajer (Celtic) wins a free kick in the defensive half.

Fraser Murray (Hibernian) wins a free kick in the defensive half.

Ryan Porteous (Hibernian) wins a free kick in the defensive half.

Attempt blocked. James Forrest (Celtic) right footed shot from the left side of the box is blocked.

Nir Bitton (Celtic) is shown the yellow card for a bad foul.

Florian Kamberi (Hibernian) wins a free kick in the defensive half.

Martin Boyle (Hibernian) is shown the yellow card for a bad foul.

Jeremie Frimpong (Celtic) wins a free kick in the defensive half.

Attempt blocked. James Forrest (Celtic) right footed shot from the centre of the box is blocked.

Attempt missed. Florian Kamberi (Hibernian) right footed shot from the left side of the box is high and wide to the right.

Attempt missed. Jason Naismith (Hibernian) left footed shot from the centre of the box misses to the left.

Attempt missed. Odsonne Edouard (Celtic) right footed shot from the centre of the box is just a bit too high.

Scott Allan (Hibernian) wins a free kick in the attacking half.

Attempt missed. Callum McGregor (Celtic) left footed shot from the centre of the box is close, but misses to the right.

Ryan Porteous (Hibernian) wins a free kick in the defensive half.