Home » Sport » Cam Newton is playing like one of the best quarterbacks in the NFL, and the rest of the league should be ashamed

Cam Newton is playing like one of the best quarterbacks in the NFL, and the rest of the league should be ashamed 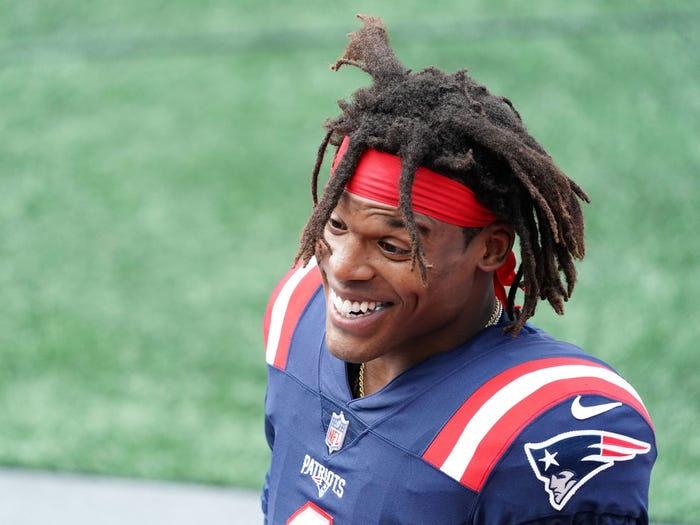 The 2015 NFL MVP's time with the Carolina Panthers was done, having not played through the 2019 season due to a foot injury. The year before that, Newton sustained a mid-season shoulder injury that hobbled his performance for the second half of the year.

While there were questions about his health, Newton wasn't that far removed from playing phenomenal football. Through the first half of 2018, Newton's arm looked great, leading the Panthers to a 6-2 start to the year. He also had a passer rating above 100 in eight of the Panthers' first 11 games.

Despite Newton's established talent, he couldn't find a roster spot until July, when the New England Patriots offered him a minimum one-year deal, with a base salary of $1.05 million. With incentives, the deal could max out at $7.5 million for the season.

And now, just two games into the season, Newton is playing like a stud, raising the question: What the hell was the rest of the NFL thinking?

On Sunday night against the Seahawks, Newton completed 30 of his 44 passes for 397 yards and a touchdown. It was the most yards he has thrown for in a game since his rookie season.

This shoulder looks fine to me.

He scored twice more on his feet, giving him a total of four rushing touchdowns on the year.

With Newton at quarterback as the primary ball carrier around the goal line, it gives the Patriots an extra blocker to get the one yard they need. While a similar play was stopped by the Seahawks at the end of regulation to seal the win from Seattle, that stop came thanks to a complete sell-out defense and a hell of a play made by defensive end L.J. Collier.

Aside from that final play, Newton and the Patriots have been unstoppable from the goal line. Had they opted for a jump-pass or play-fake of some sort on that final possession, they would likely be 2-0 heading into Week 3.

Newton's performance around the goal line alone raises questions about what front offices around the league were thinking, not picking up the phone to see what his price might be. If you told NFL teams that there was a fullback available who could punch in touchdowns from the goal line at one of the most efficient rates in the NFL, he'd get the veteran minimum — and that's before you mention that he also happens to be a former MVP quarterback who still might have some juice left in him.

But rather than fielding calls from around the league for his potential services, Newton watched as teams filled out their depth charts with other options at a higher salary.

In terms of NFL payroll, a million dollars is nothing. A rounding error. But that was all the risk it took to bring Newton into camp and see what he could offer the team. Through two games, Newton is already well worth the million-dollar risk the Patriots took on him, and he looks like he could go on to have a Pro Bowl season and lead the league in rushing touchdowns.

Now, one of the most uniquely talented quarterbacks in NFL history is paired up with a head coach whose greatest skill is making the most of what his players can do. Bill Belichick and Newton is a match made in heaven, as the former can set up the latter better than any time before in his career.

It remains baffling that Newton didn't get more offers. Maybe teams already felt they were set at the quarterback position. However, in a season with increased risks of absence due to COVID-19, and expanded rosters to go with it, you might think bringing in a former MVP would be good for the depth chart. Maybe it's because he was coming off of an injury, and COVID made it impossible to work him out in the offseason — but that didn't stop teams from signing a slew of other quarterbacks to their rosters this year.

Maybe he didn't get a call for the same reason Colin Kaepernick remains unsigned.

Regardless of what excuse a team may offer, it's not good enough. Right now, the Buffalo Bills are probably wishing they had offered Newton $2 million for the season just to prevent him from playing for the Patriots.