Bryson DeChambeau’s Ball Search Pushes Him Out of Masters Hunt AUGUSTA, Ga. — It was almost a given that Bryson DeChambeau would do something memorable at this year’s Masters tournament. It did not figure to be a booming tee shot so high in the Georgia sky that it landed clear out of sight.

Just as amazing: That swing, and the resulting penalty for a lost ball, could cause DeChambeau, the pretournament favorite, to miss the cut and be sent home from the 2020 Masters on Saturday. The missing tee shot on Friday triggered a three-hole meltdown of sorts for DeChambeau as he batted his ball around the course and dropped precipitously down the leaderboard.

It has been that kind of Masters so far for DeChambeau, who arrived at the Augusta National Golf Club awash in a wave of publicity for his prodigiously long drives. But in his first two rounds, keeping his shots straight has been a major issue.

Consider an exchange Friday evening between a reporter and Jon Rahm, one of DeChambeau’s playing partners the past two days:

Reporter: “Were you involved in the search for Bryson’s ball?”

More on that later. The far-fetched drama for DeChambeau began on the third hole.

At that point, DeChambeau, who on Friday finished one over par for the tournament with six holes left to play in a truncated second round, was enjoying something of a tournament revival. After a bumpy start early Thursday, he had rallied to get to two under par, which left him lurking behind the quartet now leading the event: Dustin Johnson, Justin Thomas, Abraham Ancer and Cameron Smith, who were all at nine under after finishing their second rounds.

The 350-yard, par-4 third hole was supposed to be easy prey. On Friday, DeChambeau smashed a shot that landed about 20 yards short of its green and just left of the fairway in some high rough. The ball disappeared in the grass. On multiple, slow-motion televisions replays, the white orb appeared to have descended roughly 330 yards from the tee and vanished as it contacted the grass.

In golf, that is known as a plugged ball and it is often visible only if someone is standing directly over it and staring straight down, but since the 2020 Masters is being conducted without spectators, there were no fans surrounding the hole to guide DeChambeau to the proper location. 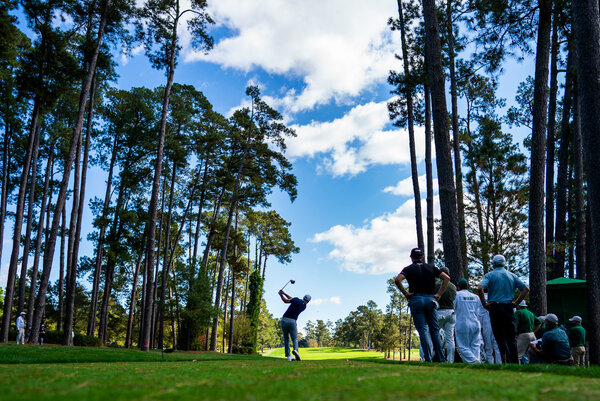 When DeChambeau reached the area where his tee shot landed, it was clear he would need reinforcements if he was ever going to find the ball. Augusta National is typically an outlier as a championship golf course because it lacks high grass outside the fairways. But that’s during its traditional April setting.

Delayed to November because of the coronavirus pandemic, the tournament is being played on grounds that have some spots with grass standing several inches high and that on Friday remained soaked by small puddles from a rainstorm the day before.

DeChambeau tramped the grass in the general vicinity of where his ball seemed to have landed. Rahm and their fellow playing partner, Louis Oosthuizen, joined him, as did their caddies and tournament officials. At one point, an assemblage of 14 men were stomping the grass in search of DeChambeau’s Bridgestone golf ball.

Based on television replays, it appeared they were looking about 10 yards to the left of where they should have been searching. A rules official began timing the episode because after three minutes any ball that cannot be found is considered lost, which draws a one-stroke penalty and requires the player to go back and replay his shot from the spot from where he hit it. That is counted as the player’s third stroke on the hole, which is enough to make any golfer feel sick.

An increasingly distressed DeChambeau plaintively asked the rules official Ken Tackett as the clock was ticking down: “So you’re saying if we can’t find it — it’s a lost ball?”

Yes, indeed. DeChambeau began to wonder aloud if the wet conditions constituted what the golf rule book refers to as “casual water,” and whether that might protect him from the one-stroke penalty and having to return to the tee. Tackett shook his head: no.

Time was up, and the ball was officially lost. DeChambeau climbed into a golf cart and hit another ball from the third tee. It struck almost the same spot as the previous ball, except it bounced and remained visible. But when DeChambeau returned to the scene, it was obvious the entire incident had shaken him.

He sent a short chip, his fourth shot on the hole, flying 20 yards over the green. His pitch from there skipped another 15 feet past the hole. Two putts later, DeChambeau had a confounding, disheartening double bogey.

“I know it affected him a little bit, because he didn’t play his best golf after that,” Rahm said.

Rahm was being empathetic, and diplomatic.

Looking frazzled, DeChambeau hooked his drive on the fourth hole, then mis-hit an iron from the rough — “Oh, I popped it up,” he yelped after the swing.

He started playing considerably faster and hardly sized up some shots before hitting them, as if he had an Uber car waiting to remove him from the scene. It was an unconscious reaction any everyday duffer would have recognized — the kind of thing golfers do when their minds are overcome by a mix of exasperation and embarrassment.

Consecutive bogeys ensued on the fourth and fifth holes. Now DeChambeau, who declined to come to the clubhouse interview area late Friday, was four over par for his round.

Rahm, who was also part of the search party that on Thursday had helped DeChambeau find a ball he blasted into the azalea bushes behind the 13th green, understood what his playing partner was going through.

“It’s unfortunate that the rules of golf don’t let you kind of figure out it’s somewhere there and keep playing — because he had to re-tee,” Rahm said. “I mean, when you have Bryson hitting it as hard as he hits it and it’s kind of hooking with not much spin into a soft area, we were all confident it was pretty buried and it was going to be hard to find.”

To his credit, DeChambeau did mount a comeback. He birdied three of the next nine holes after his debacle on the third, but missed a four-foot eagle putt on the eighth hole after a superb drive and a precise approach shot. He is not out of the tournament yet, although finding a way to contend will take a spectacular rally on his final six holes to finish the second round on Saturday.

“He’s a fighter and he’s showing it,” Rahm said.

Still, all in all, it was not the way DeChambeau wanted to make his mark on golf’s most meaningful event.

There was one last indignity to cap DeChambeau’s day: Rahm said the missing golf ball had been found in the high grass near the third green minutes after the search for it was abandoned.