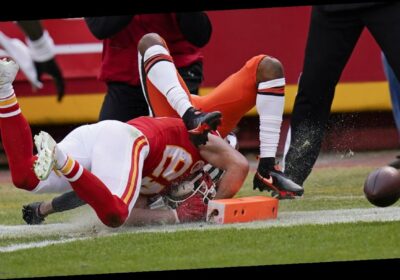 An odd NFL rule drew the ire of Cleveland Browns fans Sunday as the team was facing off against the Kansas City Chiefs in the divisional round of the NFL playoffs.

Browns wide receiver Rashad Higgins caught a pass from Baker Mayfield late in the second quarter and appeared to have a path to the end zone. Higgins dove for the score but was hit by Chiefs defensive back Daniel Sorensen simultaneously. Higgins fumbled the ball into the side of the end zone.

By rule, the play results in a touchback and a turnover. The Chiefs would receive the ball at the 20-yard line and try to score before the half.

Fans were furious over the rule.

On the play, it appeared that Sorensen might have led with his helmet when he tried to knock Higgins out of bounds. NFL fans pointed that out on social media as well.

There was 1:34 left in the half when Kansas City got the ball back.

The Chiefs drove down and kicked a field goal to go up 19-3 at halftime.

The Chiefs are on their run back to the Super Bowl. It’s their first game in two weeks since they had a first-round bye for having the best record in the AFC. Kansas City is the defending Super Bowl champion.

The Browns are hoping to get back to the conference title game for the first time since the 1989 season, when Bud Carson was the head coach and they lost to the Denver Broncos.