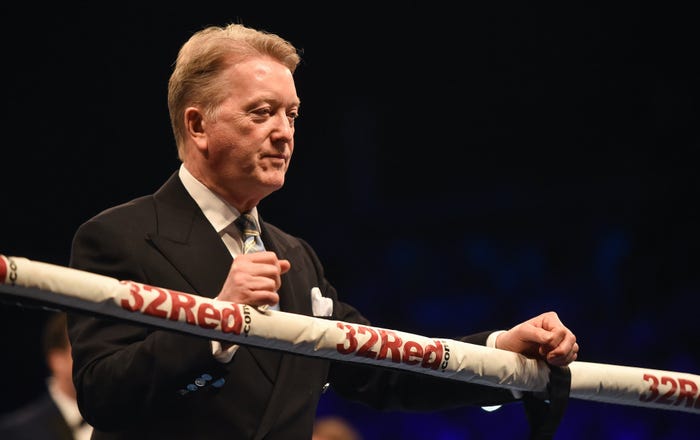 LONDON — British boxing's most powerful people are apoplectic about the UK government's apparent failure to support the sport during a COVID winter.

An emergency $400 million (£300 million) fund will be distributed to 11 sports including a combined $275 million (£203 million) to rugby union, horseracing, and soccer, Britain's government announced last week.

The fund is designed to protect the immediate future of UK spectator sports after the coronavirus pandemic delivered a heavy blow to live events, forcing shows behind-closed-doors for much of the year.

The money has been granted as a loan and is allocated "on a needs-based assessment," the UK government said.

British Boxing, though, has not received a penny, infuriating the most prominent promoters in the business who argue it could leave their sport on the ropes.

Warren is renowned for nurturing the careers of some of British and global boxing's biggest characters, from Naseem Hamed, Joe Calzaghe, and Ricky Hatton, through to Tyson Fury today.

He has also organized the November 28 battle of Britain between the super prospect Daniel Dubois and the accomplished former amateur Joe Joyce, an event which will be broadcast on ESPN+ in the US and BT Sport in the UK.

Ahead of the big London fight, Warren said he's livid with his country's lawmakers.

"I'm disgusted with how they've treated boxing," he said. "It's outrageous. All this money they've allocated to all these sports, and they haven't allocated anything to amateur or professional boxing. It's terrible, absolutely awful."

These sports will also receive funding:

The loans will be distributed to various governmental or organizational bodies — like the owners and operators of car-racing tracks, or the Lawn Tennis Association — to then allocate as they see fit.

Warren told Insider that bodies like England Boxing, which oversees amateur clubs in the country, could have benefitted from funding, as could community clubs that provide children with a disciplined environment to release their energy.

"The sport of kings [horseracing] is well supported," Warren said.

"Lower down in netball they need money, but boxing does so much for young kids who are climbing up the walls as small hall [shows] are not going on. Where is any support for them? There's been nothing, and it's outrageous."

The emergency fund was announced by two British politicians — Oliver Dowden, who is the head of the Digital, Culture, Media, and Sport department, and Nigel Huddleston, who is the sports minister.

Hearn's letter mentioned "the government's decision to exclude boxing from their £300 million rescue package," and urged it to "reconsider its position and give grassroots boxing some much-needed financial help."

Read it in full here:

Hearn later told BBC Radio 5: "You will see [boxing] clubs go out of business and go out of the local community," unless they are incorporated into the emergency funding.

"Gun crime, knife crime — these are major, major problems in our cities at the moment," said Hearn. "These clubs make people understand how to behave, they give them discipline, they give them some kind of regimen into their lifestyle."

Speaking to the Independent, Hearn added: "It's so disgusting that the government are not supporting grassroots boxing."

"We want to see the amateurs get some of it because that's the grassroots level.

"More importantly, young kids — we don't want to lose a generation of fighters. They want to fight and we want to keep that going.

"From a professional point of view, not everybody is Anthony Joshua or Tyson Fury, there's all these other fighters who are not fighting.

"We've got about eight fighters, nine fighters, who we can't put on shows. There's only a certain amount of room on shows at the moment, and there's no live gate. We're constricted with what we can do, doing the best we can.

"But the government have got to step up to the plate just like they've stepped up to other sports. I find it disgraceful.

"It's a big sport, and it's disgusting that we've not even been considered. Outrageous."

Politicians like to use boxing when it suits them but it's time to pay the sport back, Warren said

Hearn told the Independent that there's a discrepancy between the type of sports which receive funding — rugby and horseracing — and those which don't.

He said boxing misses out because politicians are "far removed" from the communities where fighting thrives.

Warren seemingly agrees as he told us politicians are all too happy to use the sport when it suits them, and argues it is now time they pay the sport back.

"When they want to get around to the working-class areas, you see all these politicians like [the British Prime Minister] Boris Johnson with boxing gloves on down the local boxing club, pre-election.

"The sport is not the 'sport of kings [horseracing],' but the sport of the people — a working-class sport.

"Most of these guys come from one-parent families, some are excluded, and this pandemic is not doing any good for them.

"If you're just saying 'We've got millions available for sport,' why haven't you considered boxing? It's outrageous."