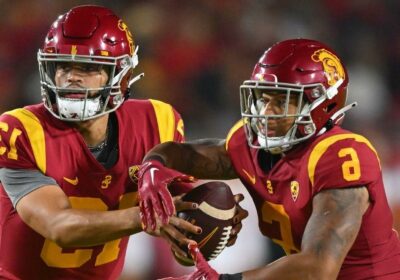 An outlier opening line on USC-Oregon State prompted a flood of bets on the underdog Beavers this week and left one sportsbook with more money at stake on the Pac-12 tilt than any of the week’s NFL games.

Caesars Sportsbook on Sunday opened USC as a 13.5-point favorite over Oregon State. Minutes later, oddsmakers at Circa Sports put up the Trojans as only a 5-point favorite. Bettors pounced on the discrepancy, causing the line to drop significantly at Caesars and tick up slightly at other sportsbooks, before settling at consensus number of USC -6 on Sunday night.

“We had a high opinion on [USC],” said Joey Feazel, lead college football trader for Caesars Sportsbook. “So we put out a number to kind of attract Oregon State money. And it worked.”

Action from influential bettors came in on the Beavers immediately at Caesars, and Feazel moved the line down aggressively. Line archives from odds provider Don Best Sports show Caesars went from USC -13.5 to -9 within 30 minutes and was down to -7 less than two hours after posting the opening number.

On Thursday, Caesars reported that 88.2% of the money wagered on the USC-Oregon State point spread was on the underdog Beavers, including a $110,000 bet on Oregon State +7 placed Tuesday in Nevada.

Meanwhile, sportsbooks that opened USC as less than a touchdown favorite were reporting lopsided action on the Trojans. At DraftKings, 79% of the money bet on the game’s spread was on USC, and at the SuperBook at Westgate Las Vegas, there were seven bets on the Trojans for every one on the Beavers.

“I’m sure we will need the Beavers huge at kickoff,” said John Murray, executive director of the SuperBook. “The Trojans are public darlings again.”

Midway through the week, more money had been bet on the USC-Oregon State spread than any other Week 3 NFL game. Typically, the betting handle on an NFL game would dwarf the amount bet on a college football game the magnitude of USC-Oregon State, with both teams unbeaten and the Trojans ranked No. 7.

Feazel said he had bounced potential opening lines off colleagues Sunday and came away with an agreement that USC should be a double-digit favorite. He said he didn’t think he would change much if he had an opportunity for a do-over but acknowledged the danger of opening numbers that move significantly.

Some professional bettors regularly will play both sides of games to mitigate risk and hope for the margin of victory to land where they win both wagers. For example, a bettor could have taken Oregon State +13.5 at Caesars and USC -5 at Circa. If the Trojans win by more than six but less than 14, the bettor would win both wagers. When the discrepancy of point spreads offered by sportsbooks are large enough, the teams don’t matter. Savvy bettors will bet the different numbers, especially if they encompass the most common margins of victory, like three and seven.

“You definitely don’t want to lose both ways,” Feazel said. “You’re striving to get to the right number, but at some point, you have to just take that risk and understand that there could be a middle.”