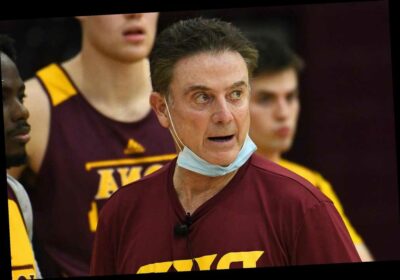 Joe Douglas and Jets must avoid the free-agency trap

The Knicks are finally a team to be proud of

The Iona name on the jersey won’t get the attention of the Gonzagas and the other March Madness powerhouses who have the horses.

But Rick Pitino standing in front of his team, pacing and sliding and crouching frenetically, certainly will.

Iona doesn’t have the horses.

But it has The Jockey.

“Well I hope we don’t play Gonzaga,” Pitino told The Post by phone and laughed, before the draw handed his 15th-seeded Iona Gaels No. 2 seed Alabama on Saturday in the East Region. “I think what I have is experience. And I think that, more than anything else, Iona’s had a difficult time getting out of the first round. They haven’t done it since Jimmy V [Valvano]. And primarily because they’re going against teams that are 20-point, 25-point favorites. I was on the flip side where you’re a 1 seed and you’re a 2 seed, and you have a major advantage physically, size-wise, and it takes an awful lot.

“But it is possible, it is conceivable. Anybody can win any game, it’s not in the NBA where you have playoffs and the best teams win it. … It’s that one game. And if you come up with a game plan that maybe shocks somebody, you could get lucky.”

If Rick Pitino was coaching The Little Sisters of the Poor, he undoubtedly would have packed the eight suits he has brought with him to Indianapolis. The eight suits he would need to survive and advance to the Final Four.

“The one thing about us, we missed 60 days of practice,” Pitino said. “We’re probably in late-December in terms of what we wanted to put in and so on. So the one thing that we had to count on was inspiration, motivation.”

So there he was at the MAAC Tournament, disdaining the warm-ups the other coaches wore in favor of a suit and tie as he coached with that forever New Yawk Strong competitive disorder that got a pair of national championships and a place in the Hall of Fame.

“I’m just trying to motivate them, and just come up with quirky things that would get them fired up, to make them dream, and make them believe,” Pitino said. “Guys have to understand how special a chance to get to the NCAA Tournament’s all about.”

This will be an NCAA Tournament like no other, every game in Hoosierville. But The Jockey will be going to the whip with his everlasting PHD — Passionate, Hungry, Driven.

“You know your window is closing, you know you’re not gonna coach 20 years,” Pitino said, “so you say to yourself, ‘if I’m blessed, lucky enough to get seven more years, make it the best seven years of your life. Have fun, be passionate, get the most out of them every second, every minute on the court.’ You don’t really look at the future as much as you look at the second you’re coaching.”

He was heartened by a photo sent him Saturday by one of his Boston University players, 38 years to the day after Pitino advanced to the Big Dance by winning the 1983 America East Conference final. Pitino showed it to the Gaels on Friday night.

“I said, ‘Guys, you know what’s interesting about this? We have one game to play. And here we are, 38 years later and my players are still texting me about this magical day,’ ” Pitino said. “And I said, ‘If you lose, you guys will never get together, you’ll never be a thread together, you’ll never be talking about this. … But if you win and go to the tournament, you’ll be part of a team that remembers each other for the rest of your life.’ ”

This Iona team endured a COVID-ravaged season that saw it sidelined without a game for 51 days, then again for 16 days prior to the MAAC Tournament.

“They handled adversity with a lot of class,” Pitino said.

Pitino himself contracted the virus.

“When we [Louisville] won the [national] championship in 2013, I told my sons, ‘I got 184 text messages after the game.’ … Last night I had 364 text messages!” Pitino said. “I just think they were happy I was back in the States coaching again. … It was a good moment for me being back in college basketball, I think they felt the way I felt.”

Iona is 1-14 in the NCAA Tournament. It was the 1980 Valvano-Jeff Ruland team that defeated Holy Cross.

Pitino has declared his innocence but accepted blame for his well-documented scandalous NCAA travails at Louisville in 2017 that sent him into basketball exile in Greece. He was asked: Is this vindication? Is it satisfaction? What’s the emotion?

“I really feel I’m way beyond vindication,” he said. “I never in the game of basketball, ever cheated the game in any way. All I was focused on was making my players better, and helping them off the court, helping them in any way I could.

“I’m not trying to prove anything to anybody at this point. All I’m trying to do is win basketball games and help these kids reach their potential.”

I asked him if there was ever one coach he wasn’t looking forward to coach against in the NCAA Tournament.

“His style of play is very difficult to go against,” Pitino said. “Outside of him, I didn’t care who the coach was. His teams were difficult to prepare for and go against.”

Beware The Jockey, back in the saddle.