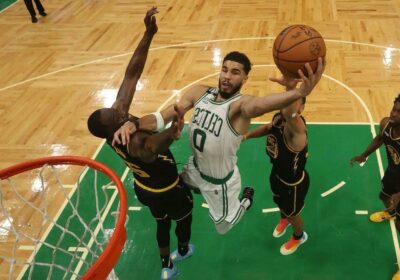 All odds are provided by Caesars Sportsbook.

Kings Of The Quarter: If you’ve paid any attention to this series (or the NBA for the better part of a decade), you’re well aware that Golden State dominates third quarters (+43 points in this series). What you might not be aware of is just how effective Boston’s fourth quarter defense has been. They are surrendering just 15.7 points in the final quarter during this series, holding the Warriors to 39.2% shooting from the field in the process.

Warming Up: Jayson Tatum’s production as a scorer has been tough to predict through three games in the NBA Finals, but if the past is any indication, he’s just getting started. This postseason, Tatum is averaging 23.4 points on 38.8% shooting in the first three games of series’, but after Game 3, those numbers spike to 30.1 points on 48.4% shooting.

Different Defense: The Warriors faced the sixth best defense in the NBA in the West Finals and are now facing the second best defense, but their offensive game plan has been very different. In the Dallas series, Golden State used Steph Curry as do-it-all option and he averaged one assist for every 2.4 shots taken. He was more of a distributor in that regard than during the regular season (3.0), and it worked, as the Warriors advanced, winning three games by double figures. This series, however, has been a very different story, as he is averaging one assist for every 6.1 shots. Three games is a small sample, but Boston’s defense has Curry hunting shots more than anything, a trend worth noting if you’re looking to bet his scoring props (overs) or his passing props (unders).

The sportsbooks appear convinced that the Celtics hold the upper hand in this series (-230) but the Tatum MVP odds are right around even money and that’s where the value lies. This is essentially a parlay disguised as a single bet: you effectively need Boston to win the series and for Tatum to be the reason why.

Part 1: the Celtics have won two games in the NBA Finals by double figures and 18 of the past 20 times a team has done that, they’ve won the title.

Part 2: if this series gets extended to at least six games, Tatum is pacing for 125 points, 50 assists and 30 rebounds. In the history of the NBA, eight times has a player done that for the NBA champion and seven of those instances resulted in a Finals MVP award. The lone exception was Magic Johnson in 1988 when James Worthy had 36 points, 16 rebounds and 10 assists in the final game of that series. I’ll bet against a Jaylen Brown putting in an effort like that, thus making Tatum a very strong bet for those looking to invest on the Celtics at a discount. — Soppe

In a game where Boston was laying 3.5 points, Klay Thompson dropped his highest scoring total of the series (25 points), Steph Curry had his best shooting performance of the series (54.5 percent) and the Celtics produced their worst three-point shooting effort of the series (37.1%) and Boston still won by 16 points. Now, with Curry’s foot ailing and the Celtics still on their home court, Boston is laying just four points? This number should be Boston -5 in my opinion, but ghosts of Golden State past are enough to keep the public thinking the dynasty is still business. Spoiler alert: It isn’t. — Joe Fortenbaugh

Stephen Curry’s foot sprain is an issue and regardless of if he plays, he won’t be 100%. The Warriors have struggled even when Curry was at his best. Draymond Green has been out of control with 15 personal fouls this series. Golden State’s biggest issue in Game 3 was their defense, allowing Boston to score 22 second chance points on 15 offensive rebounds. The Warriors don’t have the size and physical presence to counter the Celtics’ physicality. As bad as Boston has been in the third quarter, they have been great in the second quarter with +70 point differential. I like the under tonight and I’m expecting a better defensive performance from the Warriors. Looney should get more playing time, because Golden State is going to need him if they expect to win the rebounding battle. — Anita Marks

When the Warriors beat the Memphis Grizzlies and Dallas Mavericks, Looney contributed greatly. In Game 3, he played only 17 minutes, and it showed. On Wednesday night, Boston collected 47 rebounds to Golden State’s 31. In Game 4, Looney will have a chance to step up while Stephen Curry is dealing with an ankle injury. — Eric Moody

This was one of my recommendations for Game 3. We’ll go back to it since Brown had nine rebounds in Game 3 and the line is still at 6.5. He’s averaged 6.9 RPG in the 2022 playoffs. Brown will remain active on both ends of the court for the Celtics. — Moody

Curry is expected to play in Game 4, but he could be limited by his ankle injury. When Curry is on the court in the Finals, Golden State has a 116.8 offensive efficiency, which drops to 91.5 when he is off. This is an excellent opportunity for Wiggins to have a big game. Wiggins has averaged 16.3 PPG, 1.3 APG, and 6.0 RPG so far in the Finals. He’ll exceed those per game averages in Game 4. — Moody

Green had a stat line in Game 3 that he’d rather forget. In the series he’s averaging 5.0 PPG, 5.0 APG and 6.7 RPG. As the Warriors try to even the series, Green will bring an even higher level of focus and physicality to their game. This could be his best game of the series. –– Moody

Like all of us, Green has spent the last two days hearing about how poorly he played in Game 3, that he’s distracted by his podcast, and everything else. Green is one of the most prideful players in the NBA, and thus likely to come out hard in Game 4. In the five games leading up to Game 3, Green averaged a 23 PAR and was never under 20. — Andre Snellings

Smart has quietly become a plus scorer in the postseason. He’s scored double digit points in every playoffs game where he’s played at least 30 minutes, which includes essentially every game that wasn’t a blowout when he’s been healthy, and he’s scored more than 14 points in five of his last six such games (and 14 exactly in the sixth). — Snellings