After Chicago’s collapse against Green Bay in Week 1, Eddie Jackson called his teammates lazy and complacent. He said they did not finish.

In the fourth quarter of Sunday’s grudge match between the longtime rivals, Jackson, a standout safety, picked off an Aaron Rodgers pass in the red zone, effectively shutting down the Packers’ comeback attempt and giving the Bears a 24-17 victory at home that clinched the N.F.C. North title.

That Jackson limped off the field following the play, heading to the locker room shortly afterward, could portend bad things for Chicago going forward, but on this day he lived up to his promise to make sure his team did not fall apart again. In doing so he ended Rodgers’s streak without an interception at 402 passes, an N.F.L. record.

It did not help Green Bay’s chances that Aaron Jones, who emerged this season as the team’s answer at running back, injured his knee early in the game after carrying the ball just four times for 8 yards. 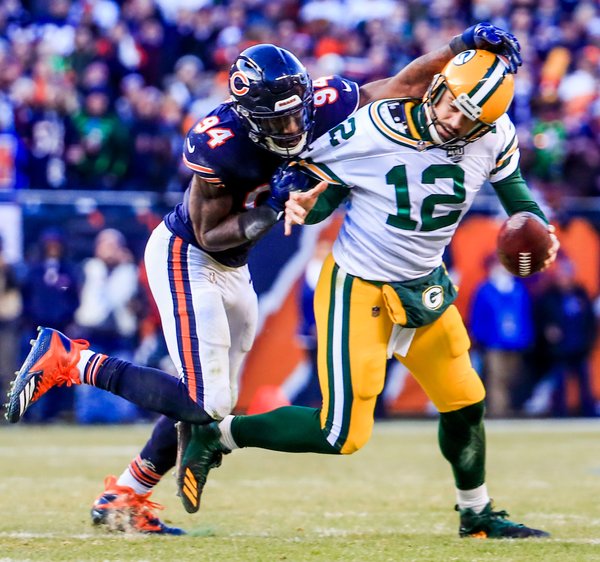 Revenge was nice, but more important for the Bears, who finished in last place in the N.F.C. North last season, was their first division title since 2010.

Things started quickly for Chicago, with the team scoring on its second offensive possession when Jordan Howard ran the ball in from nine yards out. A 12-yard touchdown pass from Mitchell Trubisky to Tarik Cohen in the final minute of the first half made it 14-3.

While the Packers eventually evened things at 14-14, Trubisky put the team ahead for good early in the fourth quarter with a 13-yard touchdown pass to Trey Burton.

That was plenty with the way the Bears have played defense this season. As they have all year, they gave up some yardage but made the opposition pay for trying to move the ball. They hit Rodgers nine times and sacked him five times — Packers-killer Khalil Mack accounted for two and a half sacks — and held the Green Bay attack to a relatively modest 323 yards.

Rodgers, who spent much of the day running away from Chicago’s intense pass rush, completed 25 of 42 passes for 274 yards but did not throw a touchdown. Trubisky, given loads of time to pass — he was sacked just once and hit one other time — easily outplayed his veteran counterpart, completing 20 of 28 passes for 235 yards and two touchdowns.

With the division wrapped up, Chicago still trails the Rams and Saints for a first-round bye, so there may not be much to motivate the team in the final two weeks of the regular season. That being said, the Bears have a winnable road game next week against the San Francisco 49ers, so they may try to keep winning to see if Los Angeles or New Orleans falter.