Home » Sport » ‘Bambi’ Winx off limits for The Autumn Sun

‘Bambi’ Winx off limits for The Autumn Sun The chances of boom three-year-old The Autumn Sun taking on world champion Winx are slim – and non-existent if the colt's senior part-owner, Arrowfield stud boss John Messara, has his way.

Sadly for racing fans who love to see top horses in action on the track as four- and five-year-olds, the economics at the top of the breeding industry will almost certainly dictate that the son of Redoute's Choice will head to stud by the end of this season.

He can, quite simply, earn far more by servicing mares for a hefty fee in the breeding barn than he could on the racetrack – even if he were to win the $5 million Cox Plate or the $7.5 million Golden Eagle, the new race in Sydney which is aimed at four-year-olds, which is what The Autumn Sun would be next season.

The other reason Messara would rather not take on Winx is that should his horse do the unthinkable and end the wonder mare's three-and-a-half-year winning streak he and his colleagues would be known as the people who slayed racing's superstar. 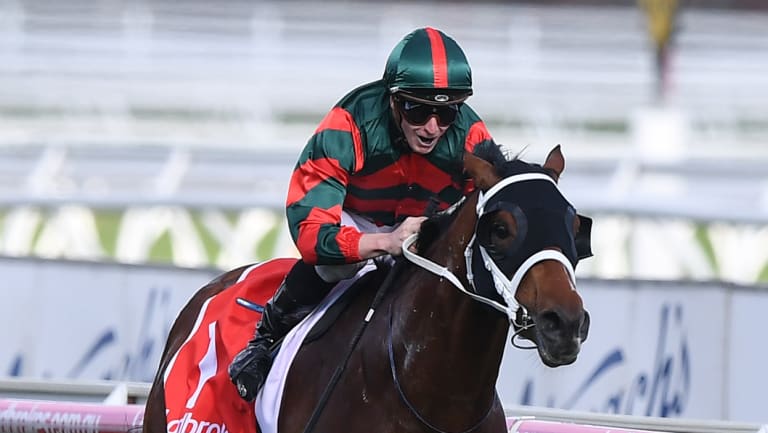 The Autumn Sun is unlikely to take on Winx.Credit:AAP

Asked on RSN radio on Tuesday whether he could see his star taking on Winx in the Sydney autumn, Messara was upfront.

''It's a possibility (but) I am hoping not … we would not want to be the one that shoots Bambi,'' he said.

''You can't be confident of beating a champion like that, but I think he's a horse to be reckoned with,'' he said.

Still, there is the glimmer of a chance that the two Chris Waller-trained stablemates might meet.

To boost his stud value further Messara would like to see The Autumn Sun win an open-age group 1 race.

If he is not to race on as a four-year-old then he might have no option but to take on Winx in the autumn.

''I would rather not face her, but maybe there's no alternative. He's very strong at 1400 metres to a mile. I think if we pushed him out to 2000 metres he would be very competitive and he would be pushed up a bit closer and he could produce a burst that puts him in an unassailable position, certainly against his own age group.

''If he wins a group one at weight for age he has proved all he has to prove.''

Messara explained clearly the fiscal realities right at the top of the bloodstock market.

''You never say never … he may go on, but at this stage the inclination is to stop at the end of this season.

''He was a big investment and we bought him with the intention of going to stud,'' he said, adding that the prizemoney he could generate on the track could not match the earnings he can generate at stud.

There was better news about the future prospects of the flying WA filly Arcadia Queen, who created a huge impression when she won the Group 1 Kingston Town Classic against older horses in Perth last weekend.

Owner Bob Peters is unlikely to target her at the All-Star Mile at Flemington in March – he believes the turnround, especially for a three-year-old filly, is too short – but he is tempted by the Cox Plate next October.

*Meanwhile a decision on Winx's autumn campaign will be made within days, according to Waller.
In a media release he said the seven-year-old superhorse had done well while spelling in rural NSW and is ''bright and in excellent condition'' for her return to his Rosehill stables this week.

The ownership group will meet next week with Waller and the trainer to discuss plans for '' a likely autumn preparation''.