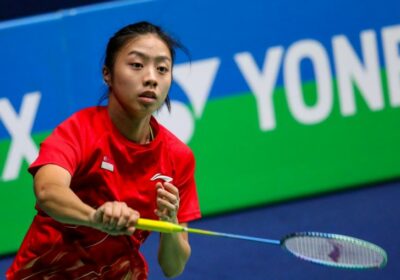 SINGAPORE – For the second successive week,Singapore’s top female shuttler Yeo Jia Min has beaten world No. 23 Gregoria Mariska Tunjung to qualify for the quarter-finals of a high-ranked tournament.

Opting for a high-serve strategy, the Singaporean impressed with her court coverage and agility as she had answers to most shots Tunjung threw at her.

In an even first game, Yeo had led 18-14 before her opponent reeled off five points on the trot. Some fine scrambling helped her level the scores and she never looked back.

The world No. 26 then built a sizeable advantage in the second game with some well-placed and well-crafted combinations. Despite a late wobble, and Tunjung’s miraculous save off Yeo’s smash from a squatting position to make it 20-17, the final result was not in doubt.

The 22-year-old’s side of the Hylo Open draw has now opened up considerably after Thailand’s top seed and world No. 8 Ratchanok Intanon retired in her round of 16 match to leave Yeo with a last-eight clash against Belgium’s world No. 38 Lianne Tan.

Yeo had breezed past Tan 21-16, 21-9 in the opening round of the French Open and a win will take her to the final four of a Super 500 event for the first time in her career.

In the men’s singles, compatriot Loh Kean Yew claimed another big scalp when the world No. 39 beat Chinese Taipei’s world No. 4 Chou Tien-chen 21-18, 21-13 in 37 minutes in their Hylo Open first-round encounter on Wednesday.

Meanwhile at the Hungarian International, a US$5,000 International Series event, Singapore’s world No. 147 Jason Teh beat Finland’s world No. 227 Iikka Heino 21-17, 21-15 in 35 minutes to make the round of 16 where he will meet Sri Lanka’s world No. 337 Buwaneka Goonethilleka.