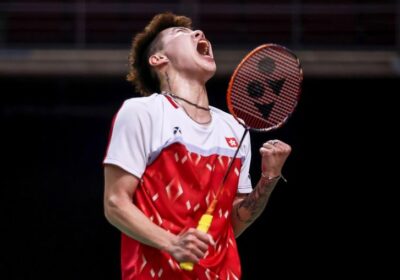 Ginting was Indonesia’s last remaining hope after Jonatan Christie’s exit on Wednesday, but despite a fightback in the second game, the 20th-ranked Lee was able to close out the match.

“He played better than me,” admitted the 24-year-old Ginting, who reached the semi-finals of last week’s tournament, also held in the Thai capital.

“When I tried to come back, Lee knew – he’s smart and he was in control.”

It was Ginting’s second loss to Lee, who upset the Indonesian in the final of the 2019 Hong Kong Open.

“I had beaten him in the Hong Kong Open final, so maybe I was a bit more comfortable against him,” Lee said.

“He’s an upcoming player that I respect a lot so I had to come with quite a high pace,” said Axelsen, who won last week’s first of two consecutive Thailand Opens.

Bangkok is hosting three tournaments in a row, culminating in badminton’s World Tour Finals next week.

The players have been facing off under tight biosecurity because of the coronavirus pandemic, and without spectators, although the tournaments have been blighted by four positive coronavirus cases.