Home » Sport » ‘Back to round one’: Local derby a must-win for struggling Swifts

‘Back to round one’: Local derby a must-win for struggling Swifts

The NSW Swifts will look to recapture their championship-winning form in a must-win local derby against the Giants on Sunday.

The reigning premiers have lost three games in a row and fallen to bottom of the ladder with half of the Super Netball season played, but co-captain Paige Hadley is confident in the Swifts’ ability to reverse their fortunes in an extremely even competition.

“We’re sitting eighth on the ladder, but we’re actually two wins away from the top four,” she said. “Everyone’s beating everyone, so you can’t predict who’s going to win each week.

“For us, it’s back to round one again, we’ve got seven [more] games and it’s about going out there and blowing it away in the second half of the season.”

It is back to round one in more ways than one for the Swifts, who last played the Giants in this year’s season opener.

The Giants won a narrow contest by two goals, with the Swifts’ Sam Wallace going down with a season-ending ACL injury, but the teams’ fortunes have diverged dramatically since then. The Giants equalled Super Netball’s all-time highest score in a 28-goal thumping of the Sunshine Coast Lightning last week, while the Swifts have struggled to adjust to the loss of their star shooter. 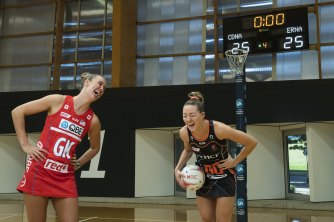 Giants mid-courter Amy Parmenter, who will play her 50th Super Netball game this weekend, said the local derby was always a close contest regardless of where the teams sit on the ladder.

“I think it’s my favourite match-up,” she said. “It’s always a really exciting game, [it’s] probably going to be physical and [I’m] looking forward to it.”

The game has added significance for Giants recruit Lauren Moore and Swifts newbie Teigan O’Shannassy, who face their old sides after switching allegiances in the pre-season.

It will be the first time Moore will take on the Swifts after missing round one due to COVID-19.

“I’m really excited,” she said. “I have so much love for them, but I feel like I had just done all the growing I could, and I needed a new change.

“I saw a perfect opportunity at the Giants with defenders leaving to work with April Brandley, who’s got a wealth of knowledge behind her and is at the top of her game.”

O’Shannassy made her Swifts debut in round three against the Magpies, coming on to limit Shimona Nelson, who had 18 goals at quarter-time, to just eight for the rest of the game.

The 23-year-old defender said her team had played well in parts of the season, but needed to work on small things as they adjust to a new game plan without Wallace.

“One player doesn’t make up our team, we’re just learning to play a different style,” she said.

“We’re disappointed in the patches of games that we’ve played really badly, but there’s still these patches where we played brilliantly.”