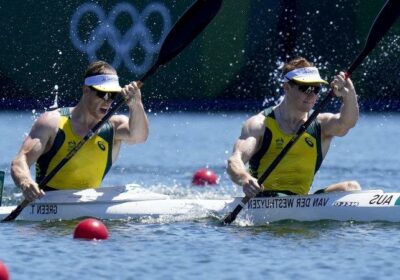 Jean van der Westhuyzen and Thomas Green are the new K2 1000-metre Olympic champions and will bring home gold for Australia after the race of their lives.

The pair established an early lead over German world champions Max Hoff and Jacob Schopf and managed to hold it for the duration of the race, finishing with a time of 3:15.280 minutes.

It’s the first time Australia has ever won gold in the canoe sprint in Olympic history, topping the Rio bronze won by triple medallist Ken Wallace and Lachlan Tame. 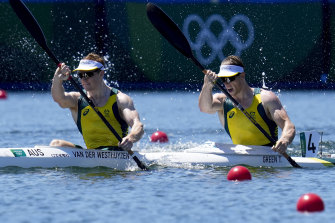 Tom Green and Jean van der Westhuyzen were fastest into the men’s K2 1000m final and are bringing home gold.Credit:AP

While the Germans charged as quickly as they could, their time of 3:15.584 was not enough to deliver them a win. The Czech Republic’s Josef Dostal and Radek Slouf won bronze and finished the race in 3:16.106.

It’s a great redemption story for the 22-year-old pair who were unsuccessful in their individual canoe sprint efforts earlier this week.

They had never competed internationally together before but posted an Olympic record in the heat, followed by the gold in the final on Thursday. Only recently emerged from junior ranks and with international racing curtailed for the past two years by COVID-19, they said after the heat they weren’t sure how they would stack up.

Green said after the winning sprint: “I didn’t want to claim it until I saw our names on the top of the screen. It hasn’t sunk in properly. I was just trying to focus.

“I knew if we held our nerve it would pay off. It’s amazing. It’s beautiful. I love it,” Green said.

Van der Westhuyzen said he was a man of faith and “I thank the good Lord. It’s an amazing Aussie team. I am so proud to be an Australian. I am so grateful for the way everyone has welcomed me. I love this country.”

The pair is based in Queensland, with Cape Town-born van der Westhuyzen moving from South Africa to Australia in 2018 to pursue his sprint canoe career.

Australia has two other K2 canoe sprint medals. In Melbourne in 1956, Dennis Green and Wally Brown won bronze in the now discontinued 10,000-metre pair event and Clint Robinson and Nathan Baggaley won silver at Athens in 2004.