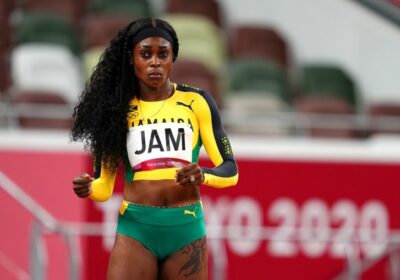 PARIS (AFP) – Olympic 100m champion Elaine Thompson-Herah insisted on Friday (Aug 27) she was too fatigued to contemplate an assault on Florence Griffith-Joyner’s 33-year-old world record but added: “Maybe I can put all the ingredients together next year”.

She ran the second fastest ever 100m in 10.54 seconds in Eugene last weekend but was pushed into second place at Thursday’s Lausanne Diamond League meeting by Jamaican compatriot Shelly-Ann Fraser-Pryce.

The 34-year-old 2008 and 2012 Olympic champion exacted revenge on Thompson-Herah for defeat in the Tokyo Games final with victory in 10.60sec, the third fastest in history.

“I think I have to run in 10.48sec if I want to prove that I’m the fastest in history,” said Thompson-Herah in Paris ahead of Saturday’s Diamond League meeting in the French capital.

“It was not my goal at all this season, to break the world record, I wanted to defend my Olympic titles, but I didn’t think I could reach that level.

“A few years ago I would have thought that impossible. I think that next season if I focus on it, maybe I can put all the ingredients together.”

Thompson-Herah admitted that the toll of racing three times in seven days on two continents could be having an impact.

“I don’t know where I get all this energy, I try to train myself not to suffer too much from travel fatigue,” added the 29-year-old.

“At the Olympics I had a lot of trouble sleeping, but I found the energy to run two races a day.

“It’s our job, it has become natural for me.”

Thompson-Herah will start as favourite on Saturday at the Charlety Stadium in Paris after Fraser-Pryce pulled out citing exhaustion.