Home » At least one Yankees player is standing by Domingo German

At least one Yankees player is standing by Domingo German 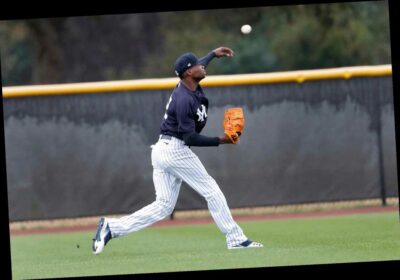 Yankees betting they have the ‘right’ stuff on offense: Sherman

TAMPA — Domingo German still has to speak to his teammates about the domestic violence incident that led to his 81-game suspension levied by Major League Baseball, but not everyone has a problem with the right-hander rejoining the team now that his ban is over.

Luis Severino has known German since 2014 and said the two are “good friends.”

That’s a different tone than what Zack Britton used last week, when the lefty said of German, “You don’t get to control who your teammates are and that’s the situation. I don’t agree with what [German] did. I don’t think it has any place in the game or off the field or at all.”

Severino added he thought German was holding up under the added scrutiny.

“I think he’s handling it really good, with all the stuff going on,” Severino said. “I haven’t talked to him about that a lot.”

Position players reported to George M. Steinbrenner Field on Monday and among those working out after their physicals were Aaron Judge, Aaron Hicks, Clint Frazier, DJ LeMahieu and Miguel Andujar. The first official workout will be at Steinbrenner Field Tuesday.

Adam Warren is back with the Yankees, making a comeback after 2019 Tommy John surgery. He faced hitters for the first time this spring on Sunday and said he felt good on Monday with “normal soreness.”

He’s in camp on a minor league deal and wants to pitch as much as possible “to prove to myself and prove to them I’m ready to pitch in the big leagues.”

He added he’s “very realistic” after pitching poorly before the injury in 2019.

“I don’t want anything handed to me,’’ Warren said. “I don’t feel like I deserve anything. My mindset is I’ve got to prove myself all over again and prove I’m the guy I was a few years ago.”