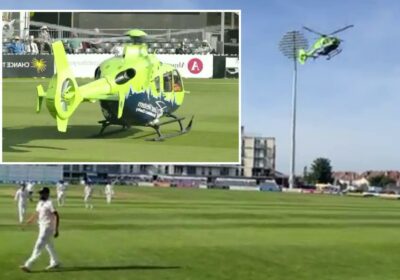 A COUNTY CHAMPIONSHIP match was halted after an air ambulance helicopter landed on the pitch to deal with a nearby emergency.

Medics were called to a residence near Gloucestershire's County Ground stadium in Bristol. 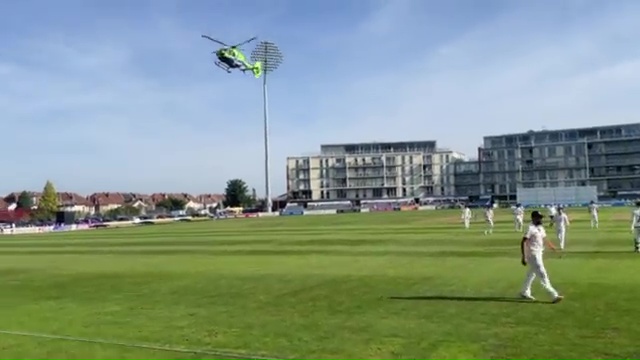 The Great Western Air Ambulance Charity (GWAAC) helicopter was sent to help the individual and the nearby cricket pitch was deemed the best location to land.

An announcement at the ground warned the players and spectators of the arriving ambulance, which landed at around 10.45am on Tuesday.

It interrupted the first over of Gloucestershire's Division Two meeting with Durham, and the players were still leaving the field as it landed.

Durham player Chris Rushworth captured the moment for a video posted on Twitter, before going Live for fans as it departed.

He captioned the clip: "This is a first!!!!! Helicopter stops play."

Play was stopped for approximately 20 minutes as the emergency was attended to, with the injured local resident taken to hospital via a land ambulance.

The GWAAC released a statement shortly afterwards to thank those at the match for their patience.

It read: "Our crew were called to an incident at a local address who had fallen and sustained a head injury.

"The team of a Critical Care Doctor and two Specialist Paramedics were returning from another local call-out so landed at the County Ground in order to get to the patient quickly.

"They assisted the patient on scene, who was then taken to hospital in a land ambulance.

"We would like to apologise for the inconvenience caused to those at @Gloscricket and thank them for their cooperation in allowing our crew to land safely and respond to the patient in need."