At a single meeting in November 1990, two events took place that would prove seismic for Australian sport. Sydney’s candidacy for the 2000 Olympic Games was confirmed by delegates of the Australian Olympic Committee, aside from the dissenting votes of a few rogue Victorians, and John Coates was elected unopposed as AOC president.

The Sydney bid would go on to be victorious, culminating in a spectacular Games that remain a seminal moment in the modern history of the Harbour City. In the process, it gave fresh impetus to a spluttering Olympic movement and fostered a sense of wholesome nationalism as we rounded the turn into the new century. 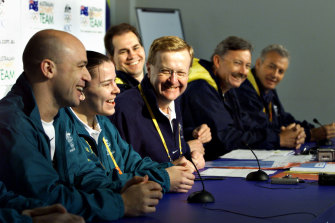 Over the next 32 years, Coates would become a titan of sports administration, locally and globally, the latter through two spells as vice-president of the International Olympic Committee. He steps down from the AOC on Saturday, less than 12 months after helping Australia win its third Games bid, this time in Brisbane in 2032, but retains his exalted IOC status.

He has been the ultimate political operator – shrewd, strategic and brutally effective at times, to the point of being accused of bullying. But he makes no apologies for the way he has conducted his business and can lay claim to being a key driver of Australia’s transition from distant voice to major player at the IOC table.

Brisbane’s coronation for 2032, thanks largely to a new bidding system Coates helped design, was his version of hitting a six off the last ball to win the Ashes at the SCG. Not that his influence will end on the weekend; he will sit on the Brisbane 2032 board, remain an AOC member for life and charge the committee about $150,000 a year as a consultant.

The preordained Brisbane result was a far cry from the frantic days before Sydney, when the race for an Olympics involved addressing each of the 87 member nations in an eye-wateringly expensive courting process that required as much guile behind the scenes as public relations in front of the cameras.

“I think in the last days, I visited 30 countries. The lobbying went right down to the wire, the last day. So it has all changed. The arrangements for Brisbane were less complex, a less costly procedure. And so we were selected as the preferred candidate. It still had to go through the IOC executive board and there were a few moments there. But in the final vote, there were only four or five against us,” Coates says.

True to form, Coates hit back sharply at critics who suggested he gave Brisbane the inside running through his role as AOC president and an architect of major bidding reforms.

“Yes, there was some criticism from some candidates who were caught with their pants down. And I think we had a big advantage, but the IOC was very careful to inform them of what was required. They actually hadn’t done the work.

“None of them had gone to that detail. There was interest, but the work behind it wasn’t done. Now those countries who were critical are all lining up for 2036.”

In line to replace Coates in his AOC role are Ian Chesterman, a well-regarded Olympic veteran who is an AOC vice-president, six time chef de mission at the Winter Games, and chef de mission in Tokyo, and Mark Stockwell, a former Olympic swimmer, businessman and accomplished sports administrator.

The election has been conducted in a collegiate fashion, a universe away from the bitter battle in 2017 when Coates saw his position challenged by Danni Roche, a stockbroker and former Hockeyroo.

The factions assembled, with Coates carrying the day, but not before an unedifying public stoush with long-time adversary John Wylie, a former chief of the Australian Sports Commission. The extended cast included some of the most influential names in Australian sport.

“The Wylie thing wasn’t just an exchange where I refused to shake his hand. He was clearly involved in finding a candidate to beat me after I’d rebuffed suggestions from him, and the Australian Sports Commission, that they should jointly be involved in the appointment of the senior officials for our teams, and they should be involved with us in the distribution of the money that we raised through the Australian Olympic Foundation and our sponsors. And so that was the background of that.

“Some said I was a bit too robust in what I said to him. Perhaps.

“So far as Danni is concerned, she rang me and said ‘I’m going to stand against you’. I knew Wylie had put [standing against Coates] to John Bertrand [Americas Cup hero and former president of Swimming Australia] and James Tompkins [Olympic champion rower]. They weren’t prepared to do it, there may have been others.

“So I was ready for it to come. It wasn’t a bad choice on their behalf. But it certainly made a lot of work. It was a terrible drain on both of us.”

As for his successor, Coates is keeping his powder dry this time around, publicly at least. But Chesterman is widely seen as Coates’ choice given his preference for advancement from within rather than new blood, something that has been a key plank of Stockwell’s pitch to the sports.

“I decided I wouldn’t get involved in indicating any preference publicly. And so I’m being very cautious in that regard,” Coates says. “Mark says it’s a 50-50 proposition. And that’s probably a good assessment.” 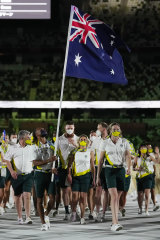 In a speech at a dinner on Saturday night honouring his tenure, Coates will point to a pair of reforms of which he remains especially proud; gender equity within teams and the increased importance and participation of First Nations athletes.

“In 1992, in Barcelona, the number of men in the team dominated the number of women. So that’s turned right around. Then when we get to Tokyo, that overall number was something like 49 per cent women.

“And we had 16 Aboriginal and Torres Strait Islanders.

“We were all very proud when we saw an Indigenous athlete represent us along the way, but no one particularly did anything to encourage it. So for me, to have 16 Indigenous [team] members in the last Games and to see Patty Mills carry the Australian flag was a very special moment. We talk about Sydney and will talk about Brisbane, but gender equality and doing more for Indigenous participation, I’m very proud of those things.”