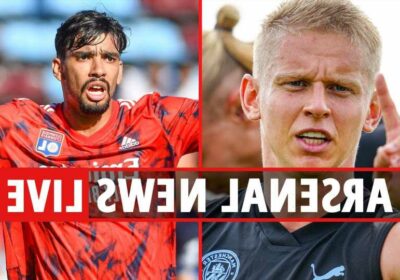 OLEKSANDR ZINCHENKO'S transfer to Arsenal has take a fresh twist with the Ukraine star weighing up whether to join the Gunners – or stay to fight for his place at Manchester City.

The champions are happy with the Gunners offer of £30 million plus £2m add-ons for the versatile player.Personal terms are in place on a four-year deal but the ink is not dry on the deal just yet.

Elsewhere, the Gunners have reportedly been handed a huge boost in their quest to sign Lucas Paqueta after Lyon slashed their asking price by £21million.

Meanwhile, reports suggest Arsenal are preparing to prize Leroy Sane away from Bayern Munich this summer.

The Germany winger has admitted he is a huge fan of Mikel Arteta's coaching, from their time working together at Man City.