For the first time in eight years, Italian motorsport fans will have the opportunity to cheer one of their own at their home Formula One grand prix in Monza this weekend.

Antonio Giovinazzi will be the first Italian since Jarno Trulli and Vitantonio Liuzzi in 2011 to compete in an Italian Grand Prix. To add to that, he will be driving for an Italian team, Alfa Romeo Racing.

“I’m proud to be an Italian back in F1 after a long eight years,” Giovinazzi said in an interview.

“For an Italian driver, to race for an Italian brand like Alfa Romeo, it’s something more, a good combination, and now I can’t wait to race at Monza. It was always my dream.”

At 25, Giovinazzi is older than most drivers making a full season debut in Formula One. He said he spent too much time in karting, competing from ages 7 to 18.

In 2012, Giovinazzi met with Ricardo Gelael, the father of the Formula Two driver Sean Gelael and the owner of hundreds of KFC outlets in Indonesia, who has said he had been impressed by Giovinazzi’s driving.

“I had the luck to meet Mr. Gelael,” Giovinazzi said. “He took me from karting and put me in Formula Pilota China, Formula Abarth, then F3, F2. Everything I’ve done is thanks to him. He was my main sponsor, he paid for everything for me.

“He took me under his wing. Without him, I would probably be a professional in karting. For sure, I would not be here.” 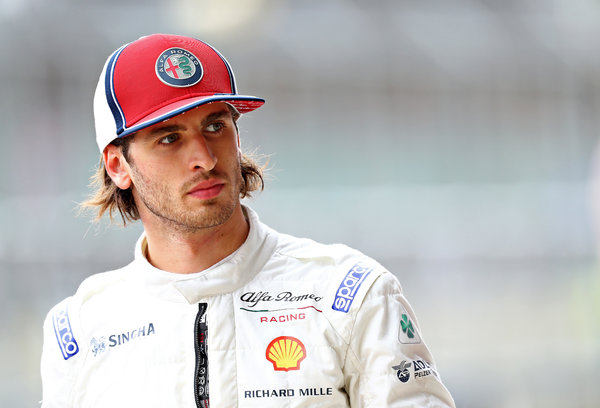 Giovinazzi finished second in the British F3 Championship in 2013 and the FIA Formula 3 European Championship two years later. He was also runner-up in the GP2 Series in 2016, a feeder to Formula One, beaten by Pierre Gasly, who now drives for Red Bull Racing.

“Antonio is a fantastic guy, a hard worker, and also really fast,” Gasly said. “We had a great battle in GP2, quite intense.”

At the end of 2016, Giovinazzi was signed by Ferrari as reserve driver to Sebastian Vettel and Kimi Raikkonen. “To sign for Ferrari is a dream for every driver but for every Italian, I would say it’s more than that,” he said.

“I still remember crying with my family when I heard the news because it was our target from the beginning of my career.”

Giovinazzi’s grand prix debut followed in March 2017, when he replaced Pascal Wehrlein on the Sauber Motorsport team at the Australian Grand Prix.

Wehrlein withdrew because he did not feel fit enough to drive after having crashed in an earlier race.

“I spent Friday watching first and second practice, and when I woke up on Saturday morning I saw my phone with a text from Ferrari telling me I would be driving for Sauber,” Giovinazzi said. “I thought it was a joke.

“I went to the track, which I had never driven before, jumped in the car, and it was an unbelievable experience. It went well. I gave my best.”

Giovinazzi qualified 16th in Melbourne and finished 12th. Driving again for Wehrlein in the next race in China, he crashed in qualifying and in the race.

Throughout the rest of 2017 and 2018, Giovinazzi learned from Vettel and Raikkonen, who is his teammate at Alfa Romeo, formerly Sauber. “He has the speed but, for sure, things still to learn,” Raikkonen said.

Although he competed in only one event during that period, the 24 Hours of Le Mans in 2018, Alfa Romeo gave him a full-time opportunity in Formula One this season.

“I’m not surprised he made it to Formula One.” Gasly said. “He had time with no racing. It is never ideal when you spend a year or so on the side not driving.

“To be in F1, it always takes time to be on top of things, but he is a driver who deserves to be here.”

Fred Vasseur, team principal, has said he will be patient. “He’s not under pressure, from the team or anyone else.”

But at Monza, as an Italian driver in his home race, Giovinazzi knows “there will be pressure because I am in F1, with an Italian team.”

He is determined to live up to the occasion.

“Now it’s great they have an Italian driver in F1 to support,” he said of the fans. “It’s important I get a good result.”