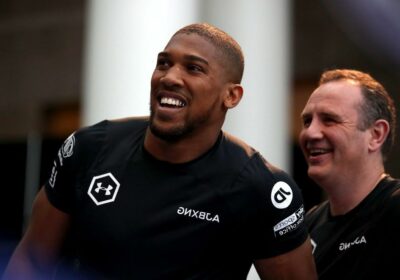 Anthony Joshua has explained why he won’t follow in the footsteps of Mike Tyson and other great fighters in working with different trainers, saying he is committed to Rob McCracken.

McCracken has coached Joshua through his big fights to date but has not been in the most recent camp as Joshua builds up to his next fight, against Oleksandr Usyk on 25 September.

McCracken has been away in Tokyo in his role as Team GB’s director of performance and Joshua admits he has missed the presence of “the gaffer”.

“Definitely,” Joshua told Sky Sports. “Rob is the gaffer. Having the gaffer there, or not there? You feel his presence. But in a way it worked out well because we have got a good team.”

Joshua explained that he enjoys looking back over the careers of previous greats in the heavyweight division in particular, but does not feel the need to follow in their footsteps when it comes to changing his trainer.

“I always look at old-school training: Manny Pacquiao had Freddie Roach, [Mike Tyson had] Kevin Rooney, Teddy Atlas and Cus D’Amato. Certain athletes move to different trainers but we kept it all in-house. We are able to perform and train, even when one person is away, we are still able to construct a good training camp.

“There are so many great old-school trainers. I like to look at not only the athlete, but who trained them. Angelo Dundee, for Muhammad Ali, was a motivational person who realised that giving him positive affirmations spurred him on. He let him be ‘I’m the greatest!’ Then Cus D’Amato was his [Tyson’s] psychologist. You look at different systems and what works for different athletes.

“The Ingle system? You know that if you walk into the Ingle gym you become part of a system. If you buy into the system you are probably ticking your name off as a champion. A coach can train the same system but has to understand what makes individuals tick. I might need motivation: ‘Come on champ, do it for your kids!’ You might need: ‘More work, we’re doing 20 rounds!’

“I’ve got to want to fight for Rob. How can I go onto the battlefield if you don’t get along with your coach and believe in him wholeheartedly?”

Joshua will fight Usyk for his IFB, WBA and WBO belts at the Tottenham Hotspur Stadium.