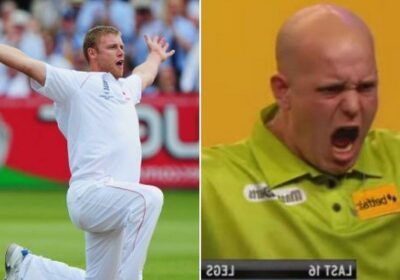 The World Matchplay has produced some of the most memorable moments in darting history over the years.

It was the stage dominated by Phil Taylor, who won the tournament an incredible 16 times during his legendary career. Peter Wright won it for the first time last year as the event returned to its iconic Winter Gardens home in Blackpool after a pandemic-enforced year away in Milton Keynes.

One of the most unique moments in the tournament’s history occurred 10 years ago when the worlds of cricket and darts collided in spectacular fashion. Darts fan and cricket legend Andrew ‘Freddie’ Flintoff guested as a commentator during a match between Michael van Gerwen and Steve Beaton at the 2012 tournament – and he got the chance to call a nine-darter.

READ MORE: Peter Wright warns darts rivals to get on the practice board ahead of World Matchplay

With the last-16 tie locked at 4-4, Van Gerwen, then 23, produced the moment of brilliance. After six perfect darts, the former all-rounder sensed something special was about to happen. After MVG nailed treble 20 and treble 19 with his seventh and eighth darts of the leg, Flintoff willed: “Go on Van Gerwen!”

And his plea was answered as the Green Machine found the double 12 bed to spark delirious scenes on the stage, in the crowd, and in the commentary box.

“Yeah, it’s a nine-dart finish!,” shrieked the Lancastrian. And his co-commentators, John Gwynne and Rod Harrington, were just as excited. “The first one I’ve seen in the commentary!,” continued Flintoff. “And the crowd erupt. John Gwynne’s on his feet, Rod Harrington has wet himself. This is amazing!”

Who will win the World Matchplay? Tell us in the comments section below.

Veteran commentator Gwynne, who sadly passed away recently at the age of 77, added: “It is amazing, it really is incredible, oh yes!”

Van Gerwen went on to win the match 13-9 before losing to James Wade in the quarter-finals. Wade was beaten 18-15 by Taylor in the final.

This year’s tournament kicks off on Saturday night with four first round ties, including defending champion Wright against Madars Razma. Van Gerwen begins his campaign on Sunday night against Adrian Lewis.