Home » Sport » An American boxing champion won a title fight because his opponent wouldn’t stop head-butting him, and was disqualified

An American boxing champion won a title fight because his opponent wouldn’t stop head-butting him, and was disqualified 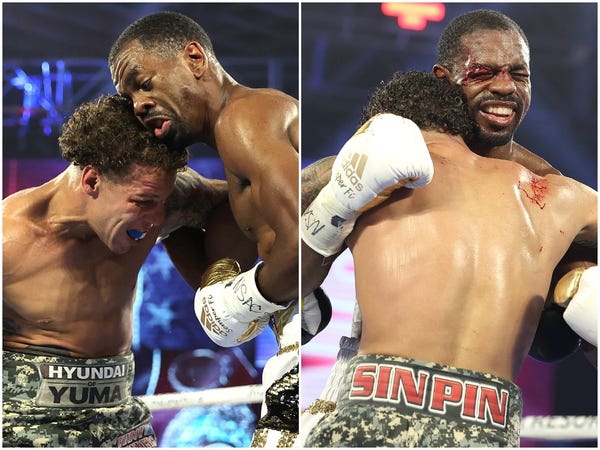 An American boxing champion won a title fight because his opponent wouldn't stop head-butting him, and was disqualified.

The championship bout was the main event of a Top Rank show and, according to Herring, "it just got ugly."

The 34-year-old, a US Marine, was even taken to hospital to check whether he had suffered a broken orbital bone because of Oquendo's constant fouling.

Even before Oquendo resorted to a ruleless prison-esque style, Herring had asserted dominance by out-landing his opponent in every round.

Herring was more accurate, displayed stinging power, and even had Oquendo on the floor in the second.

In the middle of the ring, Herring shifted his weight onto his lead foot and whipped his left fist from waist-level to his opponent's chin; a textbook uppercut which left Oquendo on the canvas.

Oquendo, meanwhile, hit Herring with a head-butt before he had even landed a jab. Oquendo's output was so pitiful he only landed one of his 29 jabs in the eight rounds the bout lasted.

Multiple clashes of heads left Herring leaking blood from wounds around his right brow, into his eye, affecting his ability to see let alone fight.

Though the most damaging foul occured in the fifth, it was not until the eighth when the bout was waved off by the referee Tony Weeks.

Oquendo was disqualified. Herring had won.

"I wasn't too satisfied with my performance, to be honest with you," Herring said after his win.

"In the beginning, everything was going real smooth, me boxing. I put him down with an uppercut.

"We knew he was going to come head-first. We had to time it. In the end, I wasn't happy with how I was looking. I'm disappointed with the outcome. I've never been in that situation."

With the win, Herring advanced to 22 wins (10 knockouts) against two losses and intends to defend his WBO super featherweight championship against the Irish former two-weight champion Carl Frampton.