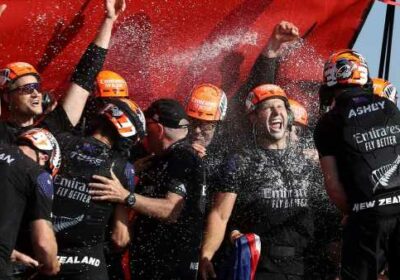 The fairness of Team New Zealand’s Ameria’s Cup win has been questioned by a leading UK journalist after the Kiwis successfully defended the Auld Mug on home waters.

Team NZ won the 36th America’s Cup over Luna Rossa with a 7-3 margin yesterday after seven days of intense racing.

But in a column for the Telegraph, respected writerTom Cary said a number of odds were “stacked in their favour”.

“There is a reason the America’s Cup has been won by the defenders 30 times in 36 Cups. The odds are generally stacked in their favour, certainly if they choose them to be. New Zealand have been fair but nevertheless, the defenders set the class rules – which in a brand new class is certainly an advantage,” Cary said.

“It stands to reason that every decision the defenders take will be in the interests of self-interest. They choose the venue, they know that venue intimately, they choose the challenger of record, they are guaranteed a spot in the final, they can watch the challenger series and analyse the boats and their tactics and speeds through manoeuvres etc.”

“In a two-horse race, it helps to have the faster horse. New Zealand may not have clocked the 60 knots they were rumoured to be clocking in practice but the wind never really blew that hard, so we’re not quite sure what they might have been capable of,” Cary wrote.

“Even in light airs, though, which were meant to be Luna Rossa’s big strength, New Zealand with their smaller foils had the better boat speed. The Italians, with larger foils, were quicker in manoeuvres and able to stay competitive as long as they won the starts as they could keep tacking on their rivals and push them around, or create disturbance.”

The Herald yesterday reported that the Royal New Zealand Yacht Squadron had accepted a challenge from the UK Royal Yacht Squadron – the home club of Ineos Team UK – shortly after reporting that Team New Zealand are understood to be considering a radical proposal for the next Cup defence – one-off defence against Ineos Team UK excluding other challengers on the Isle of Wight next year.