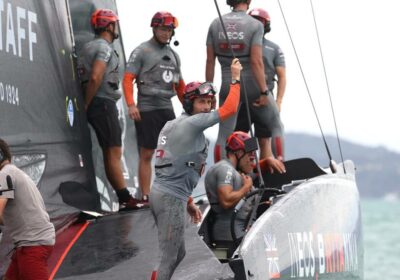 Pressure can do amazing things – even to one of the greatest sailors in history.

Sir Ben Ainslie was almost flawless with his starts in the Prada Cup round robin, with a mix of his well-honed instinct and decades of experience.

But today was a different story. With the British 2-0 down and desperate to get on the scoreboard in the Prada Cup final, Ainslie overplayed his hand in the first pre-start duel, giving the initiative – and eventually the race – to Luna Rossa.

Ineos Team UK then botched the start in the second contest, losing control of the boat as it reared violently out of the water and handing the impetus to the Italians.

Luna Rossa were good enough to hold on, with margins of 13 and 41 seconds, to round off a perfect weekend.

It leaves the British with a 4-0 deficit and 48 hours to turn things around, before the next races on Wednesday.

“We can sail a helluva lot better than that, and we need to,” said Ainslie. “We just gave them two races, bad off the start line. They didn’t give us a chance to get back into it. At this level you can’t afford to make any mistakes and we have made too many. We need to go away, regroup and really get our act together and come out swinging.”

Luna Rossa co-helmsman Jimmy Spithill paid credit to his crew, particularly the grinders, who facilitated a series of tacking duels.

“Today’s racing was all about getting off the line in front, which we did a great job of and then really just a foot on the throat approach. The boys on the handles did an outstanding job, tack for tack and we were gaining every time.”

Racing on the easternmost course E, with winds of between 14-16 knots, the British were expected to make an impression on Sunday.

But Ainslie misjudged the first pre-start and ended up below the lay line.

“We just got a bit greedy going for a hook,” conceded Ainslie. “We thought it was on for a split second and with these match race starts you can go from hero to zero pretty quickly.”

It was far from terminal – in a brilliantly close race which featured 17 tacks by each team – but it left Ineos Team UK waiting for a mistake, which never came.

The tone of the contest changed in the third leg. Until then the Italians had been mostly content to sail their own race, but they upped the aggression, tacking on top of the British and covering superbly.

The Italians looked confident in their transitions – aside from a poor manoeuvre at the fifth gate – and stayed in control.

The gap narrowed to as little as 60 metres on the last leg, but the result was never in doubt.

“Very nice,” said Spithill, as they crossed the line. “It’s on a string boys.”

The British had to respond, and their afterguard, together with the sailing coaches, held a prolonged planning meeting ahead of the second race.

They were determined to be aggressive, but everything unravelled 50 seconds before the start.

As the British changed direction, the right-hand side of the boat reared violently, flying up into in the air and looked perilously close to tilting over.

They recovered well but had lost any chance of an advantage off the start.

Luna Rossa were just ahead for the crucial first cross, and extended from there.

“We need to make something happen here,” said a frustrated Ainslie on the fourth leg but it never looked likely in the second half of the race, as the Italians stayed comfortably ahead.