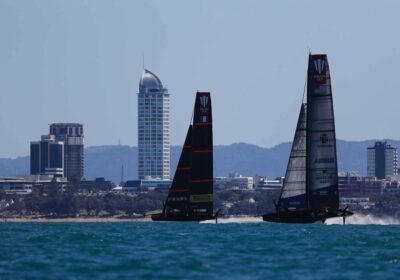 Luna Rossa are just one race away for securing their safety in the Prada Cup and sending American Magic home.

The Italian syndicate took a nicely sailed win over their American counterparts in the first of two races on Saturday, taking advantage of their speed on the upwind legs for a 35-second win.

After Luna Rossa dominated the game in the starting box yesterday, they made a couple of slick manoeuvres to overcome American Magic’s better position to get an even start.

The Italians landed the first blow with the first cross, getting their boat in a position to force an early manoeuvre from American Magic and take a 13-second lead through the first gate.

The lead was extended to 22 seconds on the first downwind leg as Luna Rossa were able to maintain their speed and quickly recover from a jibe that was not greatly executed to push the lead out.

Through the second gate, American Magic tacked straight away around the gate, looking for a way to make ground on Luna Rossa.

However, sailing the AC75s in reliable conditions as they had today, races to date have shown if the opposition doesn’t make a mistake, it is hard to make ground up. As American Magic were working to get back into the race, the broadcast picked up Luna Rossa helmsman Jimmy Spithill’s message to his team: “Let’s keep the foot on the throat.”

They did just that, further extending their lead on the second upwind leg to 41 seconds halfway through the race.

While Luna Rossa was having things their way through the first half of the race, American Magic showed they weren’t going down without a fight, making a massive gain in the fourth leg to close the gap to 20 seconds through the gate.

Needing to make something happen, American Magic split the course around the markers – rounding the left side while Luna Rossa rounded the right.

However, Luna Rossa’s performance advantage upwind was clear to see in the fifth leg as they extended their lead back to 41 seconds, before going on to claim the win.

The second race of the day, and potentially the last of the Prada Cup semifinals, is expected to start at 4.15pm.