Home » Sport » America’s Cup 2021: ‘I let them down’ – Dejected Luna Rossa co-helmsman Jimmy Spithill vows to be back

America’s Cup 2021: ‘I let them down’ – Dejected Luna Rossa co-helmsman Jimmy Spithill vows to be back 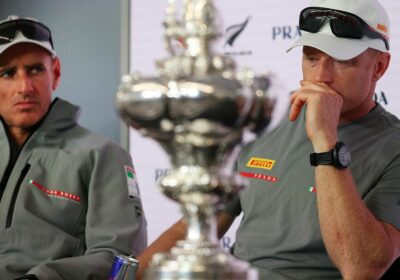 As Team New Zealand crossed the line ahead of Luna Rossa to claim the 36th America’s Cup, Jimmy Spithill’s overall record in the famous regatta dropped from 66 per cent success in finals to 50.

He has no intention of leaving it at that mark.

The Luna Rossa co-helmsman has signalled his intention to return to the arena for the 37th America’s Cup, after being outdone by the defending Kiwis 7-3 in the Cup match.

“I love the fight, I love competing. That’s my fourth Cup final in a row and I’m two wins, two losses. I can’t leave it there; I’ve got to tip it the right way,” Spithill said.

Luna Rossa sailed a strong campaign from the start of the World Series event in December until their final race of the match, but were ultimately beaten by a faster boat – as is usually the case in the America’s Cup.

“I felt like we could’ve won a few more races against the Kiwis, but to be quite honest, at times it felt like we were taking a knife to a gun fight,” Spithill said.

“They did an incredible job; developed an incredible tool and package there and all you can do is tip your hat and say well done to them. They’re a champion team and thoroughly deserved champions.

“I’m disappointed obviously. I let them down. I believe we left some race wins on the table unfortunately.”

While Luna Rossa were able to get on the board early in the regatta, the Kiwis found their comfort zone on the vessel and it showed at the back end of the series as the Defender came through to win five straight races to overturn a 3-2 deficit into a 7-3 win.

Unfortunately, due to Covid-19 precautions and wind conditions, the preferred course – Course C off North Head – was only used for one race. That race was the most exciting of the series, and Spithill said if he had one regret for the series it was that they couldn’t use that course more.

For Luna Rossa, it soon became a case of having to sail the perfect race with the Kiwis breathing down their necks.

A couple of issues – be it misreading conditions or simply being undone by them – saw Luna Rossa drop a couple of the late races to fall a few races behind, but they continued to fight until the final finish line.

“Every day we believed we could win races and we were just trying to take it one at a time. But at the end of the day the better team won,” Spihill said.

“Full credit to Team New Zealand. They developed a fantastic package and are deservedly champions.”