Home » Sport » America’s Cup 2021: Dean Barker – Why things are looking tough for Ineos Team UK and the 20 seconds that could change it all

America’s Cup 2021: Dean Barker – Why things are looking tough for Ineos Team UK and the 20 seconds that could change it all 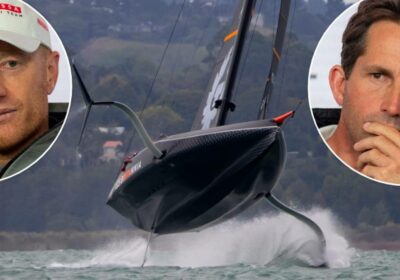 There are two major reasons the Challenger of Record (COR) got it right, and the America’s Cup Events (ACE) missed the mark in the recent scheduling standoff over Prada Cup racing.

In such uncertain times, in the middle of a global pandemic, we simply don’t know what will happen next, and as much as we want Auckland to go back to Covid-19 alert level 1, things can change quickly. So if the event can continue on as planned, it’s good for everyone and takes away the risk that things do change in the near future.

But, perhaps more importantly, from a competitive standpoint there was only going to be one outcome. When you get this deep into competition, it’s always very hard to get agreement on change. To alter the schedule which has been determined months ago requires agreement of both parties. From COR’s position, given their alignment with Luna Rossa and where Luna Rossa sits right now, there’s simply no way you could give Ineos Team UK any more time to turn it around. This schedule has been set in stone for a while and the only fair outcome is to continue on as planned.

As for the actual racing, there will be two key components this weekend; the wind speed and the start.

From our experience in the semifinal, and watching the four races last weekend, it’s clear the Luna Rossa guys are doing a really good job around the start line. They have their timing very well dialled in. There’s a very crucial point from 1m 15s down to that 55s range where there’s a lot of key decisions that have to be made in split-second timing – from when you have to turn back, lead back or push the other boat – and Luna Rossa have got that spot-on so far.

The thing that is hard to see is that Ineos aren’t actually doing anything dramatically wrong around that start line, their timing is just fractionally off and that’s leading to them finding themselves in some very difficult positions. They had the boat handling error in the race on Sunday which cost them, but in the second race on Saturday they actually had a very nice start.

Luna Rossa are strong with their tacking. They can put a lot of pressure on the other team, and so even though Ben Ainslie came off the line having a small advantage last weekend, the control went straight back to Luna Rossa.

I’d say Luna Rossa have dominated three of the first four starts. But it’s not going to take a huge amount for Ineos to turn things around. They definitely have all the ingredients and if they do, I think it will be equally hard for Luna Rossa to get around them.

When there’s an element of tactical decision making, where you have to read the wind as well as the opponent, that plays into Ineos’ favour. So there are two different styles and I feel Ineos would prefer to be in a race course where there is more opportunity. A steadier environment definitely favours the lead boat more, but if Ben and the guys can get off the start line well they can control the race.

It’s pretty even on boat-speed, it’s just hard to see in sub-nine knot winds that Ineos will be able to match Luna Rossa.