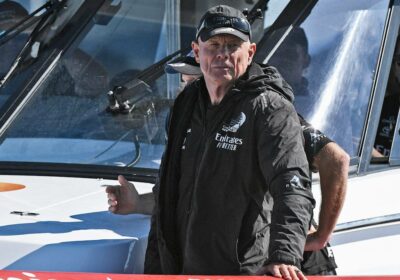 “Those who fail to learn the lessons from history are doomed to repeat them,” so wrote Spanish philosopher Jorge Santayana in the 19th century.

The lessons that need to be heeded are those from the last successful defence of the America’s Cup from Team New Zealand in Auckland in the year 2000.

After dominating challenger Luna Rossa in that regatta 5–0, the talent and experience of the Kiwi team was cherry-picked by the billionaires from Europe and North America.

Swiss-Italian Ernesto Berterelli who formed Alinghi, the first-ever rookie America’s Cup team to win the Cup, led the way in this.

The talent of the current Team New Zealand roster is clear for all to see. This team came agonisingly close to winning in San Francisco in 2013, dominated the event in Bermuda in 2017 and have impressed with their successful defence of the 36th America’s Cup.

The recipe which worked for Alinghi 20 years ago could be used again. The cheque books will be open, and not just for Peter Burling, Blair Tuke and Glenn Ashby.

Team New Zealand 2000 (which I was a member of), not only lost the “A Team” from the sailing crew of Russell Coutts, Brad Butterworth, Murray Jones, Warwick Fleury and Simon Daubney, we also lost the head of the shore team, sail design lead, and boat designers. The entire team was raided and those that remained were young, less experienced and vulnerable.

It was the classic corporate raider technique. Poach the best talent from your competitor to strengthen your team while weakening theirs.

I was there. I will never forget it.

Dalton, Shoebridge and the Team New Zealand leadership are well aware of this risk.

They can’t get anywhere close to the eye-watering dollars that will be quietly placed in front of the key talent within this Kiwi team.

The vast majority of the current sponsorship which pays TNZ’s staff will end in around a month’s time. Most of the employment agreements with the 120-plus employees of TNZ will end at the same time. These people have mortgages to pay and families to support. Loyalty to your team goes a long way Kiwis – but it doesn’t pay the bills.

Most sponsors will have a right of renewal in their contracts. Team boss Grant Dalton and COO Kevin Shoebridge will have been working on renewing (and hopefully upping) these – but sponsorship is harder than ever to secure because of the pandemic.

They will also, no doubt, seek to tap into further NZ government support to retain key talent. However, it is uncertain whether the current Labour government has an appetite for what will be perceived by many as an extravagant expenditure of tax-payer money at a time when many Kiwis are hurting financially.

It’s a tricky business funding an expensive professional sport’s team, especially when competitors can tap into some of the world’s wealthiest individuals.

This perhaps explains why Dalton and Shoebridge have been floating the idea of shopping the event around to an overseas city who can pay a large hosting fee that will help keep the Kiwi team together.

To move the 37th America’s Cup regatta to another location would be a difficult thing to stomach for New Zealand, and especially the Kiwi sailing community who are so proud to have our team win the Cup and host it here in the City of Sails.

We must avoid another Alinghi fiasco, but at what cost?

Perhaps the answer is to partner with Ineos Team UK backer Sir Jim Ratcliffe (as is rumoured to be the case) to have the British team become the Challenger of Record for the 37th America’s Cup.

With a sizeable (think of a number and then put a lot of zeros after it) investment from Ratcliffe (Britain’s wealthiest man), Dalton and Shoebridge could secure the cash they need to keep their team together and fend off the inevitable offers that their key team members will have put in front of them from other teams.

If this means that concessions need to be made to secure the deal, then that’s preferable to a 2003 situation where the Kiwi team is decimated and left trying to recruit and rebuild.

One of those concessions could be to allow part of the Challenger Series, or even a one-off America’s Cup regatta to be held in the UK.

While this would undoubtedly produce howls of outrage from Luna Rossa, American Magic and the Alinghi team bosses, a return to the origins of the America’s Cup to hold a regatta in these fantastic AC75 foiling monohulls off the Isle of Wight would attract a lot of attention.

Importantly from the two knights of the realm, Sir Jim and Sir Ben, securing such an event would potentially compensate for the lack of success from Ineos Team UK in the 36th America’s Cup here in Auckland.

In addition, a major regatta in the northern hemisphere summer of 2022 gives something new and exciting to sell into potential multi-national corporates who will struggle to see the return on their investment when asked to sponsor yet another America’s Cup regatta in Auckland in three years time.

This is going to be controversial, but as Sir Peter Blake’s mentor the late, great Sir Tom Clark once said to me: “Son, if you’ve got no dough, it’s a no go!” In a professional sporting environment, having the money to secure the talent and equipment you need is critical, without it, you are not going to be competitive.

The lessons from 2003 are clear to see. How Team New Zealand finds the support it needs to remain as the strongest and most successful America’s Cup team in history is the conundrum faced by Dalton and Shoebridge.

The key question is, what are you prepared to sell to ensure you can keep winning.

Professor Mark Orams is a former NZ and world champion sailor, Team New Zealand member, author, environmentalist and Professor of Sport and Recreation at the Auckland University of Technology.