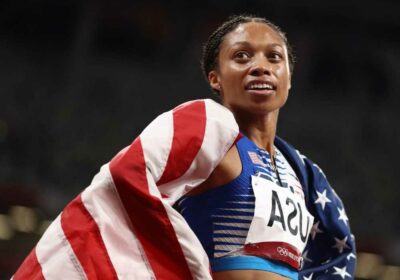 Allyson Felix has ended her Olympics career as the most decorated American track and field athlete of all time.

In her last race as an Olympian, Felix ran the second leg of the 4×400-meter relay in which a star-studded US team demolished the field on Saturday.

Felix got the baton from New Jersey’s Sydney McLaughlin and handed it to New York’s Dalilah Muhammad, with Athing Mu, also a New Jersey native, taking up the last leg of a team that ran 3:16.85, running away from the field by nearly four seconds. Poland won the silver at 3:20.53.

With the win, the 35-year-old Felix has one more medal than Carl Lewis, who had held the American track and field record. The all-time mark belongs to Paavo Nurmi of Finland, who won 12 medals from 1920-1928.

Felix said before the Games that these would be her last, and she is going out in style after winning the bronze in the 400 meters.