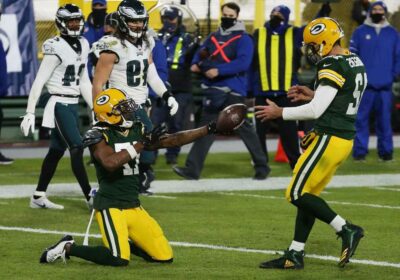 Former Jets star’s historic contract talks not ‘close at all’

After all the offseason drama surrounding Aaron Rodgers and the Green Bay Packers, it appears that the superstar quarterback will remain in the gold and green uniform.

The Packers have offered Rodgers a deal that will include concessions and will keep him in Green Bay for at least one more season, according to ESPN. The financial terms of the deal are not publicly known. The deal would also persuade Rodgers to return for the start of training camp instead of sitting out as he planned. The 37-year-old has already skipped both OTAs and minicamp.

“We want him back, we’re committed to him for 2021 and beyond. He’s our leader and we’re looking forward to winning another Super Bowl,” team president Mark Murphy said Monday at the franchise’s annual shareholders meeting.

The three-time MVP’s contract will also be adjusted to allow the Packers to have more cap space moving forward. In return, they can shift their focus to negotiating an extension for wide receiver Davante Adams. The Packers halted negotiations with Adams a week ago but will get discussions back on track since his quarterback is likely returning.

Adams was Rodgers’ go-to target last season, which was a career year for the 28-year-old. In 14 games, Adams hauled in 115 passes for 1,374 yards and a league-high 18 touchdowns. Rodgers also targeted the star receiver a total of 149 times. The two also hooked up for 18 20-plus yard plays and five 40-plus yard plays.

Both players recently posted a photo of Chicago Bulls legends Michael Jordan and Scottie Pippen, another dynamic duo. However, the photo could signify that this season may be their last dance in Green Bay.

The agreement with Rodgers would void the final year of his contract enabling him to be a free agent next year if he so chooses. It would also prevent the Packers from going back on their word and franchise tag him after the season is over.

The new offer to Rodgers comes after he originally declined a contract that would have made him the highest-paid player in football. Such a deal would have eclipsed the $45 million per year Patrick Mahomes currently makes.

The declined contract offer would have kept Rodgers in Green Bay for five years as opposed to the one year in the latest contract offer. Rodgers currently has a four-year, $134 million contract with $98.7 million guaranteed.

The two sides have been at a standstill since Rodgers told his team in April that he wanted out. The issues stem from Rodgers’ relationship with general manager Brian Gutekunst and his decision to trade up to select quarterback Jordan Love in the 2020 NFL Draft. However, Gutekunst has been open to repairing their relationship.

“We have been working tirelessly with Aaron and his representatives to resolve the issues [Rodgers has raised], and we are hopeful for a positive resolution,” Gutekunst said.