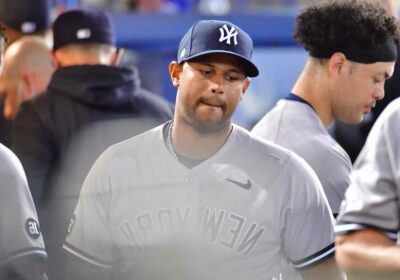 Aaron Boone needs to clean up his horrific mess

Aaron Hicks’ slump at the plate continued Sunday, and his glove wasn’t much help either.

The Yankees center fielder had a rough third inning in the 4-2 loss at Yankee Stadium, botching a pair of balls that contributed to the Rays’ two-run rally. He heard the boos then and again during his 0-for-4 day at the plate.

The first miscue came when Kevin Kiermaier hit a bloop to center field with Mike Zunino on first base. Hicks faked like he was going to catch it before it fell in front of him, but then he bobbled the ball, denying him a chance to force Zunino at second.

Yandy Diaz came up next and grounded a game-tying RBI single to center field, which Hicks again couldn’t field cleanly, allowing Kiermaier to take third base. That proved costly when Manuel Margot hit a sacrifice fly to left field for the 2-1 lead.

“With the runner on second, [Hicks] was just being super aggressive, with his arm, hoping to maybe have a play at the plate,” Boone said. “It just skipped off his glove. “Obviously when we’re not doing other things or putting points on the board like we are, it’s every little thing that adds up.”

Kyle Higashioka caught Gerrit Cole for the third time in four starts this season, but Boone said he expected to have Gary Sanchez available off the bench after suffering a contusion to his right index and middle fingers Saturday when he was hit by a foul tip.

Had Sanchez not been available, the Yankees’ emergency catcher may have been Rougned Odor, according to Boone.

Domingo German is “likely” to rejoin the Yankees rotation this week in Cleveland for the series against the Indians, Boone said. The right-hander had been optioned to the alternate site after his most recent start on April 10, with the Yankees not needing a fifth starter again until this week.

German, who gave up seven runs in seven innings over his two starts, threw Saturday against the Phillies’ alternate-site team and gave up one unearned run on two hits across five innings.

With the Yankees beginning a stretch of 13 games in 13 days on Tuesday, Boone said they would also likely add a sixth starter at some point. Deivi Garcia and Michael King are among the candidates.

“He should be starting to throw hopefully any day now,” Boone said. “I know I’ve said that in the past, but it’s my understanding that we are getting to that point.”

Miguel Andujar (right wrist carpal tunnel syndrome) is hitting on the field and throwing in Tampa. The Yankees hope to get him live at-bats “pretty soon,” Boone said.