ARLINGTON, Texas — As he charged for home plate in the fourth inning on Sunday night, carrying the hopes of the Tampa Bay Rays, Manuel Margot could have been sprinting backward through time. You almost expected him to burst through to a different dimension, back to a distant World Series on a golden afternoon, when being daring on the bases was cool.

Take 1955, the opener at old Yankee Stadium: Jackie Robinson breaking for home against the great lefty Whitey Ford, sliding safely under the tag of Yogi Berra, who went to his grave believing Robinson was out. It was Robinson’s 19th career steal of home.

“It’s not usually a good play when you’re two runs behind in the eighth, but I figured he wouldn’t be paying too much attention to me for that reason,” Robinson told reporters later. “If they give you a run, you might as well take it.”

The Dodgers lost that game to the Yankees, but they finished the series with their only championship in Brooklyn. The steal of home endures.

This World Series will have its own place in history: the first to be held at a neutral site amid a pandemic after a 60-game regular season. It will either be the first championship for the Los Angeles Dodgers in 32 years, or the first for the Rays in their 23 seasons. Had Margot been safe on Sunday, he would have tied up Game 5 and given Tampa Bay a better chance.

Instead — like St. Louis’s Lonnie Smith against Milwaukee in 1982 — Margot was out, and the Rays never brought another runner to third base. They lost to Clayton Kershaw, 4-2, giving the Dodgers a three-games-to-two lead at Globe Life Field with a chance to win the title on Tuesday.

It was the second victory of this World Series for Kershaw, who had pitched in 19 previous postseason series without winning twice. He is 4-1 with a 2.93 earned run average in five starts this October, and the crowd pleaded for more on Sunday, booing Manager Dave Roberts when he removed Kershaw after two outs on two pitches in the sixth.

Naturally, the fans saluted Kershaw as he left the field. This is his hometown — “Last minute, we were able to get a few extra nosebleed seats,” Kershaw said — and Dodgers fans made up most of the 11,437 fans. Kershaw basked in their cheers.

“Any time you can have success in the postseason, it just means so much,” said Kershaw, who is 13-12 in his postseason career. “That’s what you work for; that’s what you play for this month. I know what the other end of that feels like, too. So I’ll definitely take it when I can get it.”

This has been Kershaw’s best postseason, and the first in which the Dodgers have not used him in relief or on short rest. There is likely a strong correlation.

“To his credit, he will do whatever we ask,” Roberts said. “I just don’t know many pitchers that would do that. But in this situation, in this case, we’ve used him kind of more conventional and he’s responded really well. We’re really lucky to have him, and I couldn’t be happier that the postseason he’s had mirrors who he is as a pitcher. He deserves it.”

In another era, Kershaw would have also deserved a chance to pitch longer on Sunday. But Roberts told him before the bottom of the sixth that he would face only the first two batters, and Kershaw did not argue. Roberts, the Dodgers’ manager since 2016, said he had earned “trust equity” from Kershaw, who acknowledged he did not have his best slider or curveball.

Kershaw faced 21 batters and gave way to the rookie Dustin May, who promptly struck out Margot with a 101 mile an hour fastball. May, Victor Gonzalez and Blake Treinen held the Rays scoreless the rest of the way.

This is how games are managed now, and it is working for the Dodgers. Kershaw also faced 21 batters in Game 1, and after using an opener (Tony Gonsolin) for Game 2, the Dodgers gave Walker Buehler 21 batters in Game 3 and Julio Urias 18 in Game 4. The results for Kershaw, Buehler and Urias: a combined 2.42 E.R.A. with 33 strikeouts and five walks in 22 ⅓ innings.

“I understand that fans and players get caught up in emotion,” Roberts said, confirming that third baseman Justin Turner had lobbied on the mound to leave Kershaw in. “And I’m emotional. But I still have to have clarity on making decisions, because ultimately my job is to help the Dodgers win the World Series.”

The strategy is not altogether new; in their 2012 World Series sweep of Detroit, the San Francisco Giants also pulled starters Barry Zito and Ryan Vogelsong after five and two-thirds strong innings in Games 1 and 3. Both times, Manager Bruce Bochy called for Tim Lincecum, who overpowered the Tigers into the eighth.

So it was with May on Sunday, and Kershaw did not complain. 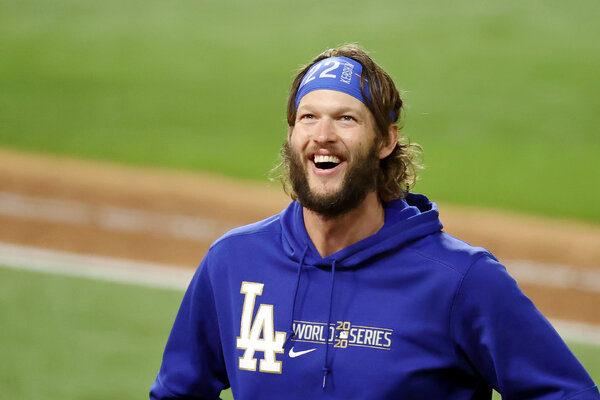 “We stuck with the plan, so credit to Doc for that one,” he said, referring to Roberts by his nickname. “D-May came in and threw the ball awesome, Victor the same way, Blake too. Unbelievable job by those guys tonight.”

For one moment, though, Kershaw was an old-time ace like Ford, startled by the alarm of a runner dashing in from third. It had happened to Kershaw before, in Houston in 2015, when Carlos Gomez broke in the same situation: runners at the corners, two outs, down by a run. Kershaw threw out Gomez then and did the same to Margot, with help from first baseman Max Muncy.

Kershaw is unusually deliberate from the stretch, standing straight and reaching above his head with both arms, as if trying to place a dot atop the letter i. Because of that, Muncy said, Kershaw stays aware that a runner behind him — on third base, that is — might try to bolt.

“I was fortunate to see one or two guys in the past maybe not steal, but they broke hard,” Muncy said. “I sprinted straight to Kersh and said, ‘Home, home, home!’ and he knew what to do.”

Margot spent the last four seasons with the San Diego Padres and faced Kershaw frequently. His calculation made sense: the hitter, Kevin Kiermaier — a lefty facing the left-handed Kershaw — was behind in the count, 0-1. If you assume, perhaps generously, that Kiermaier had a 25 percent chance to get a hit, then Margot’s chance of being safe was probably better, especially with third baseman Joey Wendle shifted far off the bag.

“From the first pitch to K.K., I knew they weren’t really paying too much attention to me,” Margot said through an interpreter. “I thought I had a chance. Obviously, it didn’t work out that way.”

“We try to do things and make decisions and allow players to be athletic, and be the athletes they are,” Cash said. “And if Manny felt that he had a read on it for whatever reason, it’s tough for me to say yes or no, just because he’s a talented base runner, and he might be seeing something that certainly I’m not — or can’t — appreciate in the moment.”

It was over in an instant, but the thrill of the effort — and the merits of the decision — will be part of World Series lore, a moment to cherish in an age of home runs, strikeouts and oh, so many pitching changes.