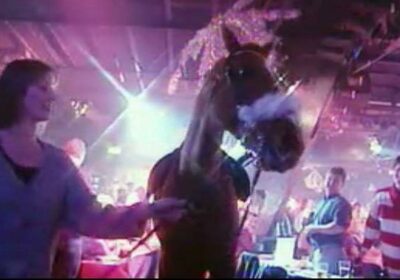 Darts has seen its fair share of characters throughout the years, almost dabbling into the realms of pro wrestling with their gimmicks.

However, it's not quite at the point that Phil Taylor is suddenly Michael van Gerwen's undead brother, and they will only settle their score at the Ally Pally.

But what both worlds share, along with Boxing, is their mutual love for entrances.

Darts has seen stormtroopers, the Grinch, and even the muffin man make appearances during legendary walk-ons.

And with the 2022 World Championships starting on Wednesday evening, Daily Star Sport is looking at six of the best walk-ons.

It was the Grinch who saved Christmas when Peter Wright aimed to put a smile on the faces of darts fans at the 2020 World Darts Championships at the Alexandra Palace last December.

Snakebite is known for his eye-catching outfits, but his red mohawk was temporarily dyed green as he sported the outfit.

"‘I’m annoyed I’m not playing before Christmas, I wanted to wear another Christmas outfit," he later quipped.

Have we missed any off our list? Let us know in the comments section

Another lockdown special, this time in the hands of Dutchman Dirk van Duijvenbode when he was preparing to face Bradley Brooks.

Van Duijvenbode made the short walk to the Oche, with the absence of fans, to DnB tunes that are more accustomed to a nightclub at 5am.

However, it only got more bizarre as the Dutchman produced an aubergine, that he then presented to the walk-on girls.

Don't miss a thing with our football updates!

Want to be on the ball with all of the latest football news?

Well then sign up for the brilliant Daily Star football email newsletter!

From the latest transfer news to the agenda-setting stories, get it all in your email inbox – don't miss a thing.

It only takes a matter of seconds.

Simply type your email address into the box at the top of this article and hit 'subscribe'.

And that's it, job done. You'll receive an email with all of the top news stories every single morning.

You can find out more information on our email newsletter on this link here.

Canadian John Part took his entrance to a galaxy far far away when he made his walk-on ahead of the 2008 PDC World Darts Championship final.

Darth Maple was flanked by Princess Leia and Stormtroopers as the iconic 'Imperial March' theme rang out.

And it worked for Part, who claimed his third World Championship when he beat Kirk Shepherd.

Steve Hine acquired the nickname the Muffin Man due to his job in a bakery, and he tapped into that for his walk-on.

Hine donned a chefs hat and apron as he produced a tray of muffins which he proceeded to hand out to members of the audience.

This all happened as Dizzee Rascal's 'Bonkers' rang out around the arena: Spectacular.

Back in the 1990s, Bob Anderson was one of the most popular players on the circuit, and when he entered the arena on a horse that popularity only skyrocketed.

It was the first round of the knockouts of the 1995 World Championships, and Anderson was facing eventual champion Phil Taylor.

"“That damn horse gets more publicity than I do," Anderson later recalled.

While Devon Petersen's ring walk might not be as iconic as the others on this list, he managed to get the entire stadium singing Shakira's Waka Waka.

The song was originally released for the 2010 World Cup, held in his native South Africa.

Petersen then took it to the next level with some slick moves when he reached the Oche.