Home » Lifestyle » ‘You’re not going to be everyone’s cup of tea’: The perils of podcast success

‘You’re not going to be everyone’s cup of tea’: The perils of podcast success

Nobody takes a second glance at Zara McDonald and Michelle Andrews when they walk into Top Paddock cafe in Richmond for our interview over lunch.

Online, the pair command huge audiences, with 48 million downloads of their podcast Shameless and 540,000 social media followers, but say they are rarely recognised when they are out and about.

The occasional person who does come up and introduce themselves is invariably “lovely”, McDonald says, but online their experience can be very different. 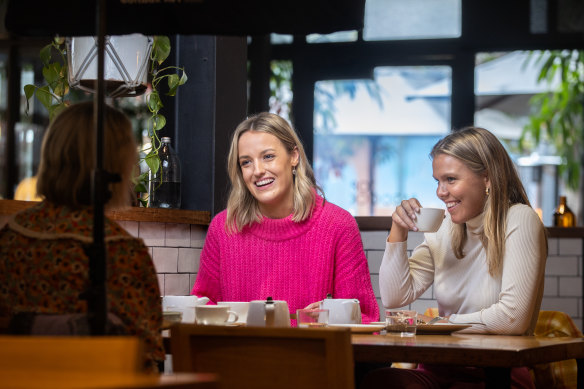 McDonald and Andrews say they regularly receive online abuse criticising everything from their opinions to their appearance, and when they started out, the attacks left them in tears.

“One day we were just bawling our eyes out on my couch, just being like, ‘How are we going to do this?’,” Andrews says. “You just have to push through. I think for us, there were times when we legitimately thought: Can we do this? Do we want to do this? Is it worth it? But I think the greatest shame of all would have been letting those people that are just a vocal minority online push us out of a job that we love doing.”

The job that they love has grown from one podcast to a small media company that employs eight staff who work out of a Richmond co-working space just around the corner from Top Paddock.

The pair are regulars at the large, white tiled cafe with its floor-to-ceiling windows looking out onto Church street.

McDonald and Andrews say a visit to Top Paddock is their cure to cabin fever at work.

“If we are trying to problem-solve or brainstorm and feel like ‘I cannot be in the office right now’, we’ll just come down and chat,” McDonald says. “The solution is often so simple once you are in a different space.”

A waitress arrives to take our order but McDonald and Andrews are both a firm ‘no’ to a glass of wine as they have a podcast episode to record after lunch, and order pots of herbal tea for the table instead. 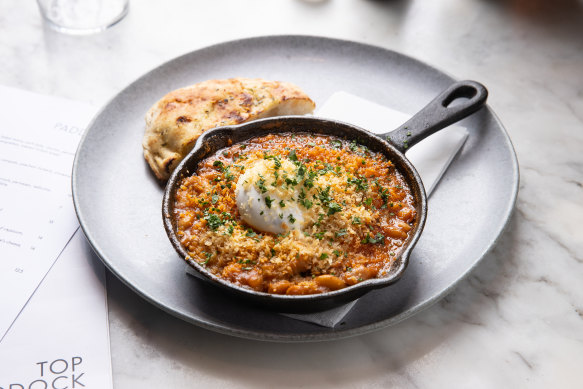 McDonald and Andrews started Shameless in 2018 when they were working as journalists for Mia Freedman’s Mamamia network.

The two friends pitched the idea of a podcast aimed at 20-year-olds that covered “fun, smart celebrity media” to Mamamia initially.

“We tried to really think of every element of why it would work for them,” Andrews says. “We put our heart and soul into [the pitch].”

The media company rejected their pitch, which McDonald is philosophical about now.

However, despite the knock back from Mamamia, they were convinced they had identified a gap in the podcast market.

“We decided very quickly this is not an earth-shattering gap, it’s a good gap because we want this podcast for ourselves,” McDonald says. “But someone will fill this if we don’t do it.”

Andrews describes herself as “the most risk-averse person I know”, but says starting their own business didn’t feel like a risk at the time because of their age.

“We were thinking, ‘Well, we’ve got to do this now before we have kids, mortgages, whatever, all of these people or things relying on us, or we’ll never do it’,” she says. 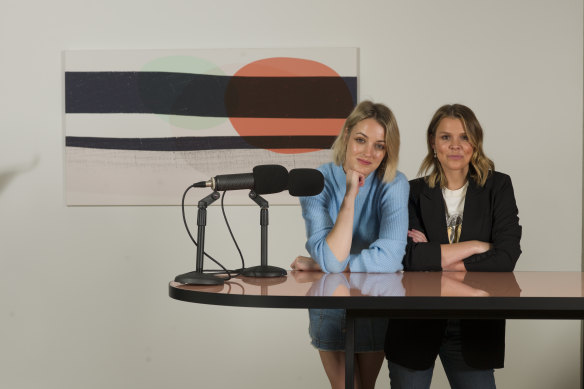 The pair built an audience for Shameless with “zero budget” by sticking posters advertising the podcast on the back of toilet doors at Melbourne’s universities and by using social media to spread the word about what they were doing.

McDonald says “timing was huge” in Shameless′ success, with the podcast market not as saturated as it is now, but also key was identifying an audience that wasn’t being catered for.

“Michelle and I have always both been incredibly interested in celebrity and pop culture,” she says. “I think for a long time we felt shamed by that, just not having any sort of safe space to talk about it in a way that we felt was kind of smart, because I think for a long time the media has denigrated the interests of young women.”

McDonald says they both believed they could have a smarter conversation about a reality-television show like The Bachelor than their boyfriends could have about football, yet there were hundreds of AFL podcasts and no smart celebrity podcasts at the time.

“We don’t care if something is considered lowbrow or highbrow,” Andrews says. “We love all of it and we want to have a laugh, but also do some hopefully smart analysis.”

Our waiter interrupts to bring over our orders of crisp glazed pork belly tossed with wafer-thin pieces of fried eggplant for Andrews, which is topped with shards of crackling and doused with chilli oil.

It’s hearty cafe food on a cold Melbourne day and my order of slow-cooked lamb shoulder falls apart on the fork, teamed with crisp fried Brussels sprouts and a dollop of smoked yoghurt.

McDonald has ordered from the specials menu a ‘breakfast cassoulet’ jumble of baked beans, pork belly, chorizo and pancetta, topped with a runny egg and golden breadcrumbs.

“This should be on the menu all the time,” she says. 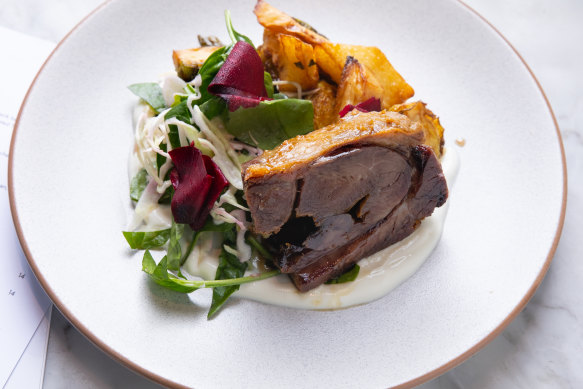 Whether you think it is smart or smartish, Shameless has struck a chord; this week it was ranked 19th on Chartable’s Apple podcast list.

The pair won’t reveal any financial details but say it is just as successful commercially as it is with listeners.

Since Shameless Media started running adverts on its podcasts in October 2018, it has never aired an episode without an ad.

“Mamamia really trained that into us, better or worse, that if you’re going to put a piece of content out, it needs to make money in some form or another,” McDonald says.

To that end, they have expanded their offerings from their initial podcast Shameless to new podcasts Scandal, Everybody Has a Secret and Love Etc, and a newsletter.

“We’ve always had a surplus of ideas for shows,” McDonald says. “We’ve just never had the resources to be able to make them when we spend so much time on Shameless.” 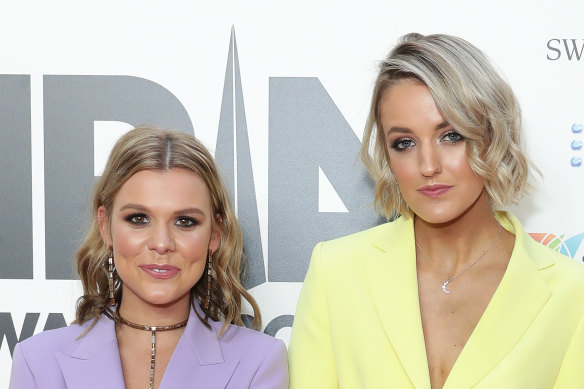 Zara McDonald and Michelle Andrews at the 2019 ARIA Awards, the pair say they now mainly stay away from events. Credit:Getty Images

McDonald and Andrews have also deliberately stepped back from some aspects of the business.

“We get excited when our face and voice are not on something,” Andrews says. “We really like the idea that Shameless Media in five years will be known for far more than Zara and I.”

Andrews says they now “lean away” from social media, going to events and attaching their own names and faces to things.

“We just really want to be seen in the media space doing our own thing,” she says. 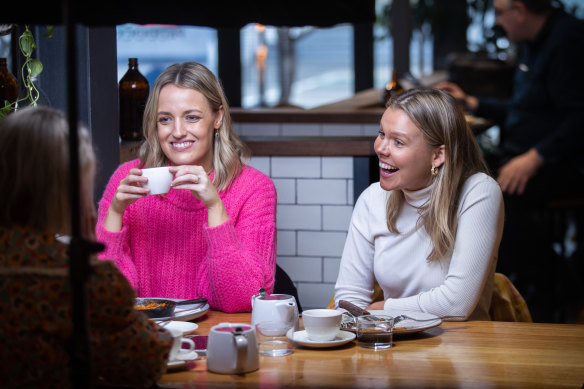 There have been several approaches to buy the business but McDonald says by the time people came knocking, it was too late.

“You’re going to hand over 50 per cent of your revenue and they run off with it and take the reins over when you are going to give them the keys to the castle that you built,” she says. “I love being independent.”

As McDonald and Andrews approach 30, they are not concerned about staying relevant to an audience predominantly in their 20s. 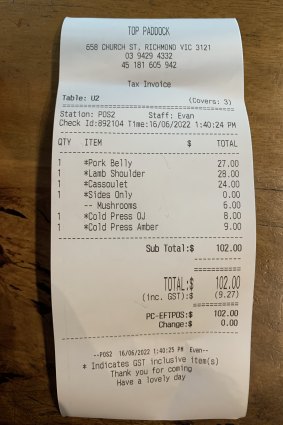 The bill for lunch at Top Paddock with Zara McDonald and Michelle Andrews.Credit:Cara Waters

“I feel like they grow with us,” Andrews says.

The average Shameless Media listener is about a year younger than them and Andrews believes their mix of highbrow and lowbrow content is relevant to all age groups.

She says while they probably receive more trolling and online abuse as young women with a public profile, over the years they have learned to take on board criticisms while ignoring the abuse.

“I don’t want it to also never affect me because I do want to have feelings about things,” McDonald says. “I don’t want to be made of stone.”

Andrews says they have learnt to build an armour that is made up of each other, their team, mentors, partners and family.

“It’s just a part of life knowing that you’re not going to be everyone’s cup of tea,” she says. “That’s fine … we’re in a really strong place with it now.”