When the monotony of winter has set in, it can feel spring is a lifetime away. You need excitement, you need change, you need summer to come. But if you’re ready for something new and different, Fanta finally has another new flavor coming your way. Last year brought the debut of Green Apple, but Wild Cherry Fanta will be gracing grocery shelves soon, according to Chew Boom. That’s right — Fanta already has a Cherry flavor, but this year that cherry is going wild. Per Delish, it was one of the most requested flavors from fans, so a lot of people are going to be excited to hear that their Wild Cherry Fanta dreams have become a reality.

What will the new flavor be like? Per Chew Boom, Fanta describes the drink as "sweet fruit notes with a sharp tart edge." Essentially, it’s a little of everything — it sounds like a perfect more mature, bolder option to your traditional Cherry Fanta. Swish it around in a glass like red wine, laugh at a joke you don’t understand about classical music, and watch the world burn.

Per Chew Boom, it will be rolling out to major U.S. cities beginning Feb. 25. Depending on how much Wild Cherry you’re hoping to get your hands on, the new flavor will be available in 12-oz. aluminum cans, 20-oz. plastic bottles, and two-liter bottles.

Interestingly, McDonald’s is already offering a Frozen Wild Cherry Fanta on their website… so maybe it will be a reality sooner than you think — but I make no promises. Icy drinks always make it feel like spring is here and summer is right around the corner, so it would definitely be a welcome edition the the menu. In fact, frozen Fanta treats have long been a crowd favorite, with McDonald’s and Burger King both offering different flavors over the years. Let’s see what happens with this Wild Cherry situation. 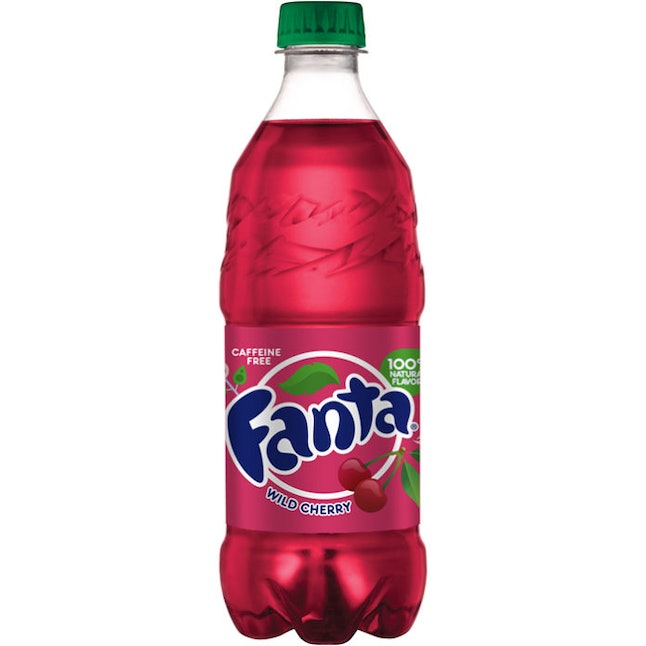 A new Fanta isn’t the only soda hitting the shelves this year. Although we’ve all recently been blinded by the Valentine’s Day and Easter candy that’s been filling the shelves, soda is also having a bit of a moment. Diet Coke introduced Blueberry Acai and Strawberry Guava flavors, which are peak sophistication, and Coke’s new Orange Vanilla flavor was a total game-changer. The new flavor, which has a creamsicle feel, updated the classic soda for the first time in a long while. Not only that, but Sprite is now offering Lymonade — a mashup of Sprite and lemonade — which has a serious summer vibe to it. And of course, if you’re in Japan (where all good and interesting flavors happen) you can get an alcoholic Coke drink, just to keep things really interesting.

Fanta is known for its huge range of flavors, but they keep on expanding that list. Wild Cherry Fanta promises to be a bolder option and it’s one that the fans have been asking for — ask and you shall receive. Keep an eye out on shelves in major cities, and hopefully we’ll get a nationwide rollout soon.