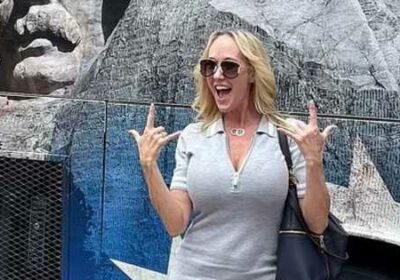 Brandi was supposed to go to Turning Point USA's Student Action Summit in Tampa, Florida, last weekend and had even been tweeting excitedly about attending.

Sharing a photo of herself on Twitter, she wrote: "It's good to be around so many young conservatives. Gives me some hope!"

However, she soon received backlash online for attending the event, which was targeted towards 15 and 16-year-olds.

Then just hours later, Brandi – whose real name is Tracey Lynn Livermore – shared an email she'd been sent which told her she was no longer welcome at the summit.

The email read: "We regret to inform you that your SAS 2021 invitation has been revoked.

"If you have confirmed and/or paid to be a guest at our summit you have been refunded and should see that reflected in the next 3-5 business days.

"This decision is final. This revocation does not impact applications to future events and we hope that you will consider applying again in the future.

"Please do not attempt to attend the summit as any attempt to disrupt may affect consideration for future participation."

Sharing the screenshot of the email, Brandi wrote: "Can't make this s**t up lol!!

"And then they had me thrown out of the Turning Point USA conference.

"The Republican Party is broken."

TPUSA has since released a statement, with a spokesperson saying the decision to uninvite Brandi was not due to the backlash.

In a letter to Newsweek, spokesperson Andrew Kolvet said: "Turning Point USA did not block Ms. Love from its student event because of 'backlash'.

"A few concerned parents rightly alerted us to the extremely pornographic nature of her social media post, and event leadership immediately took the appropriate steps in keeping with the best interest of the minors present at the event.

"Furthermore, Ms. Love purchased an adult VIP ticket. She was not invited nor was her attendance somehow requested by the organisation.

"Parents deserve this type of assurance and TPUSA intends on giving them that confidence. Any 'controversy' is purely contrived."