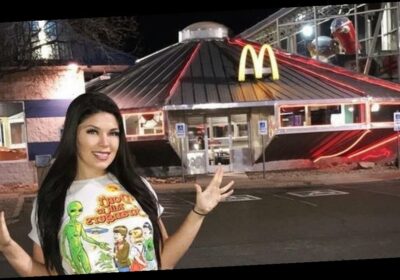 There are approximately 38,700 McDonald’s outlets in the world.

The fast food giant has outlets in more than 100 countries – from Australia to South Africa and Alaska.

Most of the diners are recognisable from their burger-based menus and iconic golden arches.

But there are some Maccies locations in the world that completely stand out from the crowd.

Unique McDonald’s restaurants have been built inside planes, mansions and even a UFO.

So how many of these places do you want to visit?

It’s the only McDonald’s shaped like a spaceship and is illuminated with neon lights at night.

Daily Star spoke to Instagrammer Amanda Lynn after she stopped for a bite to eat at the outlet.

She said: “I am a huge fan of McDonald’s – the history, the branding, the food is all very nostalgic and a big part of our culture.

“I also love to stop at quirky roadside attractions.

“For these reasons, the flying saucer shaped McDonald’s was high on my bucket list.”

Amanda, who took two days travelling to McDonald’s as a part of her cross country road trip from California to Pennsylvania, loved the experience.

She said: “Aside from appearance, there were no differences.

“They have all the beloved McDonald’s characters in space themed costumes hanging from the ceiling.

“My favourite were the space McNuggets!

“It was just a really cool experience to be eating in a flying saucer in a town famous for UFOs.”

Taupo tourists can stop off at a decommissioned Douglas DC-3 plane for a Happy Meal.

The old aircraft, which still features its original cockpit, has the McDonald’s logo on its exterior.

30 years ago, it was transformed into a dining room with 10 tables.

It’s proven to be a hotspot for influencers looking to take quirky pictures with their burgers.

Although it is a bit of a tight squeeze!

Recently, a TripAdvisor guest gushed: “While driving through central Taupo, I spotted a DC3 airplane sitting in front of a McDonalds, I had to stop for a look see.

“Chicken sandwich and chocolate shake was as good as any other McDonalds, but the airplane experience was great!

“Truly a must see, and I went there twice!

“This place can be very busy at lunchtime and parking is difficult, but I'll definitely go back for another look at the airplane.”

This US branch, which is located in Maine, looks nothing like the other restaurants in the chain.

In fact, the only distinguishing characteristic is the McDonald’s sign on the front door.

This is because it used to be a mansion owned by William Gore, a former business-owner of Freeport.

When the property was sold, locals weren’t keen on the idea of a fast food outlet taking its place so decided to keep the Gore House in tact.

In 1984, McDonald’s media manager Stephen Leroy explained: "What we are doing there is something we probably have never done before in terms of design and the amount of time and effort involved.

"We are willing to spend the money to make it compatible with the area, the history, the community and the people who live there."

The interiors almost look like the dining room of a fancy house.

Unlike the booths and diner chairs you usually get at Maccies, you'll find wooden tables and seating.

And that's not all to celebrate.

Those looking for something up-market can order a lobster roll if they really want to indulge.

But if you want to stick to your regular order you can order burgers or nuggets instead.

The McDonald’s in Porto, a coastal city in northwest Portugal, has been dubbed the “most beautiful in the world” by some.

Its building used to be occupied by Cafe Imperial, a renowned coffee outlet that opened its doors in the 1930s.

Maccies took over in 1995 but kept many of the stunning Art Deco characteristics.

Dubbed McDonald’s Imperial by locals, it boasts a Henrique Moreira bronze eagle statue at its door.

Then when you walk inside, you’re dazzled by colourful stain glass windows.

Even the ceilings can be gawped at as they hold up crystal chandeliers and sculptures.

There's also a balcony and other artwork for punters to marvel at while they're waiting for their food.

As shown in the picture above, some even bring their animals along to wrangle money off tourists! McDonald’s in Champs-Elysees, Paris is one of the biggest McDonald’s restaurants in the world.

But this isn’t the only reason it stands out from the crowd.

Unlike the distinctive golden arches that indicate Maccies outlets everywhere else on the planet, the logo here is white.

Rumour has it – this is because Paris ruled all signs on the Champs-Elysees in the French capital have to be black and white.

Another big bonus of going to the Parisian McDonald’s is that you get to order macarons.

The stunning counters are filled with the almond snacks and come in an array of different flavours.

Lime, chocolate, pistachio, raspberry and cherry are among the varieties available for 95 cent.

There are also stunning desserts like lemon tarts and cheesecakes.

Could this be the most picturesque McDonald’s in the world?

The diner, in Yangshuo, China, is located right by the Li River.

You can travel down the water by boat or backpack through the countryside before stopping off for a Big Mac after.

Alternatively, check out some of the menu items available in China.

Pineapple pie, Sichuan Double Chicken Burgers and Spicy McWings are some of the delicacies on offer. This is because the building dates back to 1897 and used to be the city’s old bank.

The original doors are still completely in tact, which pulls tourists in.

They have classy tables inside the old bank too.

But on TripAdvisor, customers have commented that all the menu items and general experience is similar to other Maccies outlets they’ve visited.

As you can imagine, the McDonald’s on the Las Vegas strip is one of the flashiest fast food outlets there is.

It’s are nestled right beside Harrah’s Casino and welcome guests in with dazzling lights.

The golden arches are lit-up and are so big guests can walk beneath them.

Then when inside, there’s a painted ceiling mural with palm trees and nods to Sin City.

In keeping with late night partying and early morning comedowns, the diner is open 24 hours a day.