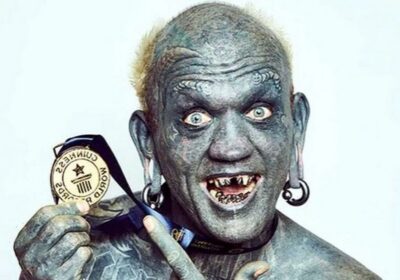 Having spent more than 1,000 hours getting inked, the former circus performer is covered in body art.

In fact, the Guinness Book of Records believe he has "200%" of his body tatted as he has inked two complete layers from head to toe.

And barely any part of it hasn't seen a tattoo needle. His eyelids, the upper part of his ear canals, gums and even his foreskin are covered in ink.

Born in New Zealand with Australian Aboriginal heritage, Rich grew to be a performer and joined the circus aged just 16.

Juggling chainsaws, riding unicycles and swallowing swords, it was also when he got his first tatt.

Thousands of tattoos later, he now holds the title for "the world's most tattooed person" – a record he has held since 2006.

As well as his amazing tattoos, Rich also had other modifications like replacing his teeth with silver veneers and stretching his earlobes.

Speaking to the Guinness Book of Records, 51-year-old Rich said people have differing reactions when they meet him.

"Everyone’s different with how they react. It’s like the weather, you can’t predict it, you can’t control it, you just deal with it as it comes,” he said.

“I’m no different to anyone else, I’m just heavily tattooed.

"I bleed like anyone else, I have the same sorts of problems that most people have living through their daily life.”

His first tattoo was a small juggling club on his hip.

"I got tattooed again when I was 18, and then I got regularly tattooed as much as I could."

He continued: "I was performing all over the world, travelling as a street performer. With the money that I made, I put it back into how I look. It seemed like the right thing to do, karmically."

But although he got his first tatts as a teen, Rich didn’t become truly obsessed until he was 28.

He then got a “body suit,” a tattoo that covered his entire torso.

“Then I started going over the tops of tattoos I already had. I blacked my entire body in,” Rich explained.

“I was going over the top of that with white and then color over that. It’s just layers on layers."

Discussing his tattoos, Rich said he doesn't have any favourites, and not one does he regret.

"No. I don’t regret anything that I’ve got or done," he said.

"I think that’s a fear that people have that aren’t tattooed.

"You can always get them fixed, covered, changed, or removed."

Rich was actually born as Gregory Paul McLaren. So how did he pick the new name Lucky Diamond Rich?

"Diamond came about because my friends call me a bit of a rough diamond, and Rich because I’m rich in spirit."

For more of the latest news from Daily Star, make sure you sign up to one of our newsletters here