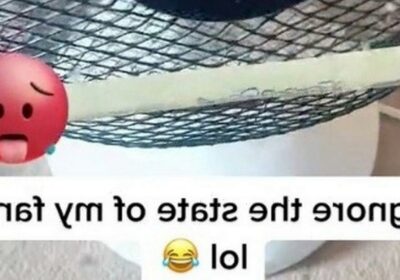 A woman has shared a life-changing hack to help Brits stay cool as temperatures in the UK are set to climb again next week.

Jacqueline shared a clever trick she learned, which involves securing two ice pops to the front of the fan with clear hair elastics, to TikTok where the video quickly went viral more than 21,000 likes.

In the video, she explained: "My life hack of the day. You know these little elastic hairbands you get? Attach them to your fan, pull it through. Then you go and buy some of these (ice pops), long ones, make sure they’re frozen.

"Put them through the loops in the fan… Aircon. Cold air. Best thing about these, you can chuck them back in the freezer, get some more out and you’ve got more cold air! I thought I was f**king genius."

The hack won't break the bank either as she used Mr Freeze ice pops in the video, which costs just £1.70 for a box of 20 at Sainsbury's – that works out to 8p per ice pop.

TikTok users flocked to the comment section to praise her for the advice as they claimed they would be going to the shop to grab some in preparation for the mercury hitting 35C on Monday (July 18), as the Met Office predicts.

One user wrote: "That is genius, off to buy ice pops now!"

Another added: "Reckon am giving this a go but gonna put loads on."

"What a brilliant idea I know what I am off to get tomorrow thanks," a third wrote.

An amber extreme heat warning has been extended until Sunday (17 July) and Monday (18 July) as temperatures could be in excess of 35C in some southern parts of England. More widely, temperatures are expected to reach 32C.

The Met Office says that these high temperatures could extend further into next week and an extension of the warning will be considered in the coming days.

The rare warning states there could be a danger to life or potential serious illness as a result of the scorching temperatures.