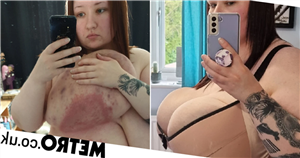 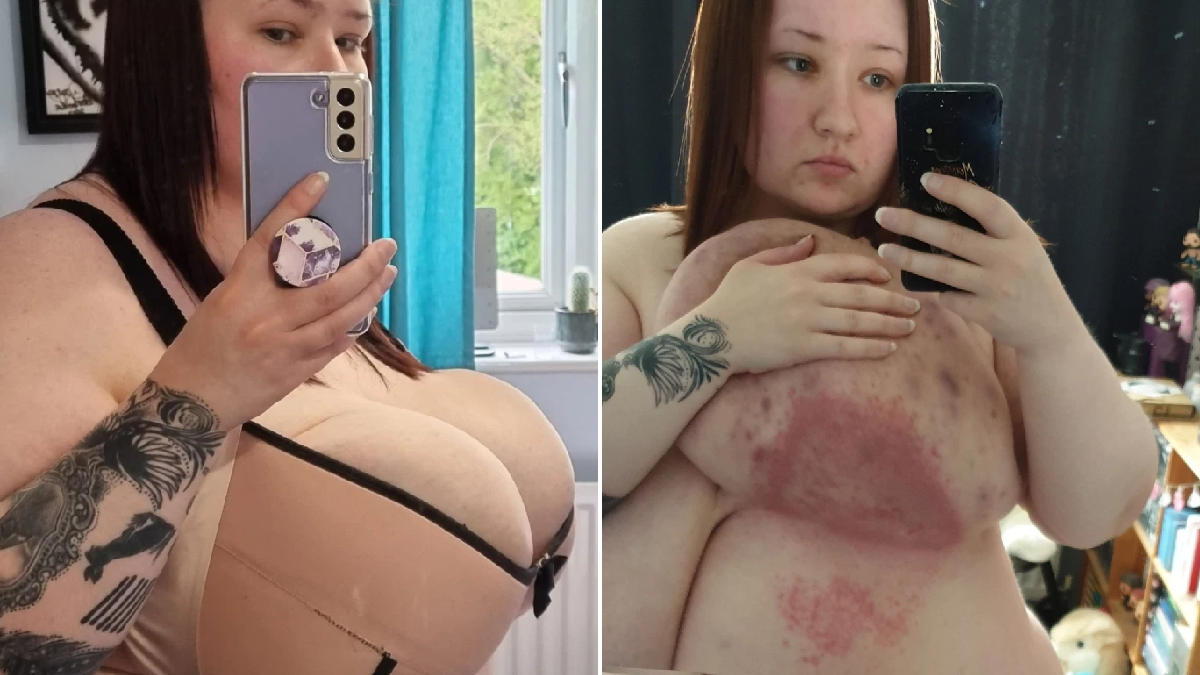 Laura Howes boobs measure around a 36P – but she has to squeeze them into a 36K bra as it’s the biggest she can find in the UK.

Her four stone breasts cause back pain so severe it radiates up to her jaw and she permanently has dents in her shoulders from the bra.

The 27-year-old is covered in cysts, cuts, friction sores and rashes that constantly bleed and become infected in addition to fat necrosis lumps caused by bumping into things.

Back in 2017, she spoke to her GP about a reduction but was refused due to having a BMI above 27.

She embarked on a two-year health and fitness plan – working with a dietician and trainer to drop the pounds but struggled due to her breasts causing her significant pain.

When covid hit she was unable to work out in the gym and her weightloss journey ground to a halt.

She tried visiting a different doctor and Laura, who currently weighs 22st, claims she was told that it would be ‘physically impossible’ for her to reach the goal because of her boobs.

The doctor filed an extenuating circumstances letter – but she was rejected again.

Not wanting to put her life on hold any longer, Laura is now raising the money herself to have the operation done privately.

Laura, from South Shields, Tyne and Wear, said: ‘Everyone says to me “I’d kill to have boobs like you” and I’m like “no you wouldn’t”.

‘I’ve got size 36P breasts but wear a 38K bra because I can’t get ones in my size, they don’t exist in most countries.

‘The absolute worst pain I get from them tends to be the cysts and sores because they can be open wounds, because they rub so much they take forever to heal and they really hurt.

‘I have dents and blisters on my shoulders from wearing the wrong-size bra for so long and blisters from the underwiring too.’

She also struggled with fat necrosis lumps caused by bumping them into things or trying to squeeze through small spaces.

She added: ‘I’ve jammed my boobs in doors before – even squeezing through a smaller space in supermarket aisles – any kind of knock and bump can result in that.

‘It’s basically injured tissue but it can form quite a hard lump that doesn’t move.

‘It does feel a lot like cancer and it looks like cancer on scans. When I didn’t know what they were that was a real worry.

‘I also suffer from aching bones from my ribs all the way up to my jaw.

‘It’s a constant dull radiating pain, I try not to take painkillers too often because I don’t want to become dependent on them.

‘I do take them when it gets particularly bad, for example when I’ve had a long day wearing my bra.’

Dealing with the problem since puberty, Laura, who lives with 23-year-old supermarket worker boyfriend Sean Peacock, decided to ask for help two years ago.

Not only had she been dealing with years of physical pain, she’d also been bullied throughout her teenage years.

Laura said: ‘I’ve been plagued by a bad back since the age of 14 as my boobs have grown quite rapidly over the years.

‘I went straight into a B cup at the age of nine or ten and then by the time I left primary school at 11 I was already a double-D.

‘I used to get bullied for that quite a lot at school. I would have boys running around yelling ‘jugs’ at me and staring at me and it was really uncomfortable. I was a 34K by the time I left school at 16.

‘I was bullied up until the age of 14 then everyone grew up a little bit and I ended up with unwanted attention from lads, and I didn’t want that either, I would cry on my own.

‘I did have some teachers at school I opened up to a little bit about it. My art teacher gave me a lunch time pass so I could go and get my lunch first and then go up to the art room.

‘I would spend my breaks there and I didn’t have to be around anyone except in class, eventually my close friends joined me.’

The first GP told her she would need to lose weight but Laura was still struggling and she went back but was seen by a different doctor.

Laura claims she was told that reaching a BMI of 27 would be ‘physically impossible’ unless she were to become seriously underweight.

Laura said: ‘My boob issues got worse so I went back to see if any exceptions could be made or I could get any extra help.

‘I spoke to a different doctor and he was the one who looked at my height and my weight, he said ‘this isn’t adding up, you won’t be able to get that BMI’.

‘He said it would be physically impossible for me to ever have a BMI of 27 unless I were to become seriously underweight.

‘He put in an extenuating circumstances form for me and I was rejected.

‘It was crushing getting that call saying ‘no’, the second the doctor hung up I just let it all out’.

After being knocked back twice Laura, who is forced to squeeze into size 24/26 tops or XL men’s t-shirts, has decided to take matters into her own hands and is fundraising to get surgery done privately.

Laura said: ‘A friend mentioned the idea of a GoFundMe page a year ago to fund a custom bra for me.

‘At the time I was like ‘no, it’ll be fine’ but then after that phone call saying ‘no’ I decided to go ahead.

‘I looked at a few local cosmetic hospitals that did breast reductions and they all range between £7,000 and £8,000.

‘It’s absolutely ridiculous that so many people have donated. One lady donated and messaged me to say her daughter had big boobs as well, she knows the issues I’m going through and was really sympathetic and supportive.

‘It’s really heartwarming that people are out there willing to donate, it’s really nice.

‘I’m not fussed what size I go down to as long as I can buy a bra in a shop, that’s all I want out of life at the moment.

‘It would be the biggest relief physically, mentally and emotionally.

‘I would just be able to live life rather than just existing like I am now, it would be a life-changing procedure.

‘At the moment I can’t really do much. I don’t like going outside because if I do I get stared at and I have to put a bra on and it hurts so I mostly just stay inside when I can.’

An NHS South Tyneside Clinical Commissioning Group spokesman said: ‘We are unable to comment on individual patients, but we can confirm that the CCG bases its criteria for a number of surgical procedures on the best available scientific evidence.

‘This enables us to focus our resources on people who are most likely to benefit from an intervention, and to avoid interventions when they are likely to be ineffective, or worse still dangerous.

‘We recognise that there are occasionally situations that do not fit the usual criteria, and individual funding requests can be made for such exceptional situations.

‘In cases where BMI is an inappropriate way to judge whether an individual has reached optimum lean body weight, alternative validated measurements can be provided to support such requests.

‘We advise that anyone in a similar situation should continue to work with their GP.’