Woman reveals her 15-year friendship was ruined by 'bridezilla' pal Woman reveals she ended her 15-year friendship with ‘self-absorbed’ bridezilla who threatened to FIRE her as bridesmaid if she didn’t buy a designer dress or pay $1,500 for the bachelorette party

A woman who was asked to be bridesmaid by her best friend revealed their 15-year friendship ended due to the bridezilla’s ‘high maintenance’ demands.

The anonymous friend, from the US, took to Reddit to explain how the bride-to-be requested she take weekends off work for shopping, expected her to pay $1, 500 (£1, 151) for the bachelorette party – and even threatened to fire her from the wedding party.

And many were quick to take to the comments section, slamming the ‘self-absorbed’ bride-to-be for her diva-like expectations.

‘Good on you saying NO! Why should bridesmaid buy a holiday and excursions/events for a bride? wrote one, while a second agreed: ‘When did it become okay for brides to expect this s*** from bridesmaids?’ 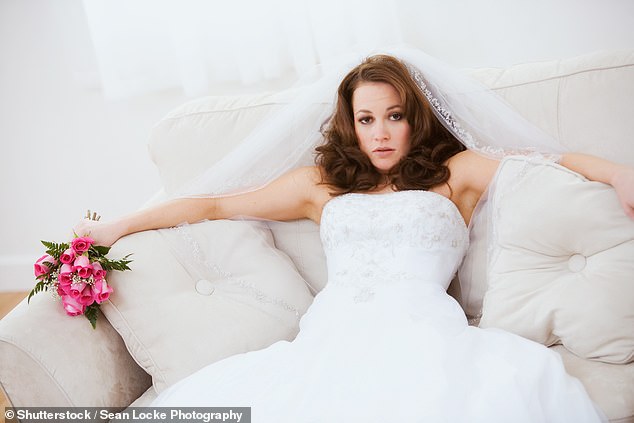 An anonymous woman, from the US, took to Reddit and told how she fell out with her friend of 15 years after she turned into a bridezilla. Pictured, stock image

‘I don’t think all these financial obligations are expected from groomsmen. This bride is nuts and self-absorbed.’

The friend admitted she was ‘thrilled’ to be asked to be bridesmaid at first, but it wasn’t long before the demands started and her feelings changed.

She went on to explain the wedding was set for three years time as the bride wanted to ensure she got ‘the best of everything’ – and that’s when the pair ‘started to clash.’

Expanding on her former pal’s ridiculous expectations, she penned: ‘She would request entire weekends off to get bridesmaid dress shopping together.’

‘I couldn’t do that because I had to work some weekends or I couldn’t figure out how to get back to my hometown. When I did make it, she looked at dresses in the $500+ (£383) range. I was very worried as I couldn’t drop that kind of cash on just the dress’.

On top of this, the annoyed woman went on to say how the bride-to-be was also keen for an out of state bachelorette party – and expected her to take time off work, pay for flights, pay for hotels and all her events, costing around $1, 500 (£1, 151).’ 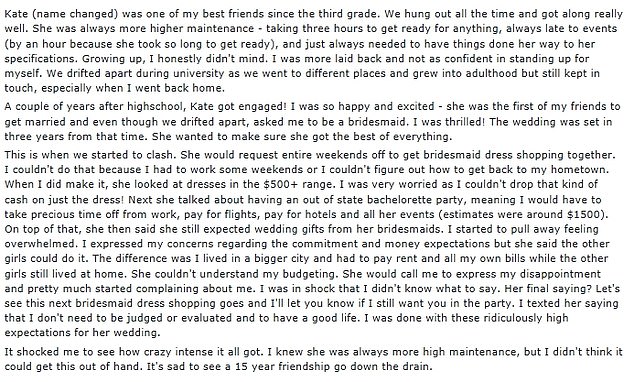 And to add further fuel to the fire, the bridezilla ‘still expected wedding gifts from her bridesmaids.’

Many were quick to defend the friend, and told how the money she was expected to spend was the same as their budget for the entirety of their big day.

‘That’s INSANE. That is my budget for my entire wedding,’ wrote one, while a second raged: ‘That’s seriously crazy. I get that some people want really big weddings but I really don’t understand how they can expect other people to pay big money for them, or to be a part of the wedding.’

A third added: ‘Dear Brides – it is your responsibility to pay for dresses, hair, shoes etc that you want your bridesmaids to wear if you have a particular vision that must be adhered to. It’s your wedding, not theirs so pay up!’

The bridesmaid admitted she started ‘felling overwhelmed’ and so made her concerns about ‘the commitment and money expectations’ known.

Taking to the comments section, one frustrated person commented: ‘When did it become okay for brides to expect this s*** from bridesmaids?’ (pictured)

‘She couldn’t understand my budgeting,’ explained the former friend. ‘She would call me to express her disappointment and pretty much started complaining about me.’

‘I was in shock that I didn’t know what to say. Her final saying? Let’s see this next bridesmaid dress shopping goes and I’ll let you know if I still want you in the party.’

Fed up, the friend revealed she decided to text the bride-to-be and told her she refused to be judged, before wiping her hands of both her and the ‘ridiculously high expectations for her wedding.’

Adding to the comments, one social media user penned: ‘I’m so so glad you pulled out before spending any of that money on her.’

‘if they were really your friend, they wouldn’t ask you to essentially put yourself into debt for THEIR wedding. Good on you for getting rid of such a toxic person.’

Meanwhile, another wrote: ‘That’s my income for the year in £ I’m glad you got out I pity the other girl didn’t and dropped all that cash. That sucks.

Another told how it should be the bride’s responsibility to pay for dresses, hair and shows if they had a particular vision (pictured)